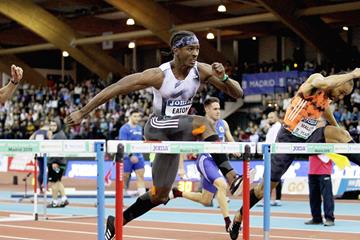 A trio of recent 60m hurdles medallists will face-off at the Orlen Copernicus Cup, the fourth stop of the 2020 World Athletics Indoor Tour, in Torun, Poland, on 8 February.

Reigning world indoor champion Andrew Pozzi of Great Britain will take on Milan Trajkovic, the current European indoor champion, and Jarret Eaton of the US, the 2018 world indoor silver medallist and winner of the event on last year's World Athletics Indoor Tour.

Pozzi and Eaton share indentical lifetime bests of 7.43, the Briton's from 2017 and the American's from 2018. Trajkovic, a 2016 Olympic and 2019 World Championships 110m hurdles finalist, clocked his most recent Cypriot national record of 7.51 at the World Indoor Championships in 2018.