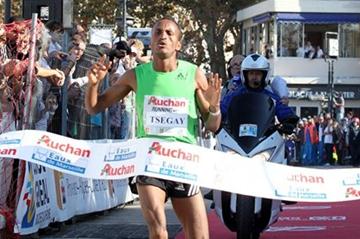 The men’s race over the 20.308Km course opened very fast. As early as 3Km, three men already emerged in front as they left Marseille for Cassis: two Kenyans -Philemon Limo, the winner in 2010 and big favourite, and Titus Masai, the sixth place finisher at the 2010 Half Marathon World Championships - and the young 20-year-old Ethiopian Tsegay.

After 10 minutes, Tesgay tested his rivals with a sharp acceleration, to which Masai replied, while the experienced Limo in his third appearance in this race, patiently stayed behind. The sixth kilometre was reach in 17:40 and a prematurely tired Masai was dropped while Azmeraw Bekele (a 59:39 performer at Half-Marathon) made a strong comeback to join Tsegay and Limo.

While ascending the Col de la Gineste, Tsegay injected several accelerations, but Limo and Bekele remained in contact. However, the rest of the field was definitely out of the race for the win. At the top of the Gineste, the exact mid way of the race reached in 29:50, the leader was 33 seconds behind the pace set by James Kwambai in 2002, when he established the race record of 59:01. In the descending half of the race, Tsegay kept playing with the tempo but without being able to leave his two rivals for more than ten metres. The 15th kilometre was reached in 44:25 with Limo taking the lead while Bekele remained hidden in third place.

With three kilometres to go, Tsegay again injected an acceleration which turned out to be fatal for the Kenyan. More surprisingly, Bekele responded with a sprint that left his Ethiopian teammate perplexed. A few seconds later, Bekele crossed a check point and stopped running, only to realise that he had committed a terrible mistake, thinking he was already at the finish line. After checking his watch, he shook his head and, as he was caught by Tsegay, the race took its course again. Tsegay increased the pace again as both runners entered Cassis. The unfortunate Bekele used his remaining energy in a desperate and ultimate sprint, but it wasn't enough to keep Tsegay from the victory. He crossed the line in 58:11, smashing the record by 50 seconds. Bekele, exhausted and upset, jogged through the actual finish line under the record as well.

The women's race offered much less suspense and drama. The two favourites, Kenyan Lydia Cheromei (winner of the Prague Marathon in 2:22:34) and Ethiopian Atsede Baysa (double winner of Paris Marathon with a best of 2:22:04) controlled the race from the start. Already several metres back, Kenyan outsider Cynthia Jerotich couldn’t sustain the very fast pace. For the 36-year-old Cheromei, the tactic was clear: run as fast as possible and never look back.

By mid-race, there as no doubt as the outcome. The gap between Cheromei and Baysa kept increasing in the downhill leading to Cassis’ port, along the Calanques of the Mediterranean Sea, in sunny and warm conditions. In the impressive slope into town, it was obvious that the leader was taking no risks. Her margin was such that she was perceptibly decelerating in order to avoid any mistake. Sure of her victory and that she would break the race record, the Kenyan was all smiles in the last metres of the race. She crossed the line in 1:08:23, seven second faster than the old record held by Susan Chepkemei since 2000.

“I felt very good from the beginning, even though the race was very difficult going up and then going down," Cheromei said. "I’m very happy to win and to get the record. This is a beautiful day!”