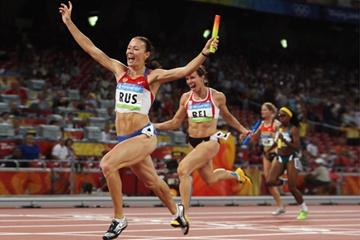 It is probably best not to make too many predictions, certainly not when it come to the 4x100m relay.

Jamaica were expected to land a sixth track and field sprint gold medal of a track and field programme. Some even speculated that this crack squad - which included the 1-2-3 from the 100m final as well as Olympic 200m champion Veronica Campbell-Brown - could threaten the 23-year-old World record of 41.37 held by East Germany.

Yet as was shown by yesterday's heats - in which the US dropped the baton and crashed out of the competition - the relay is a precarious event and so it proved, again.

Jamaica appeared to be in control but third leg runner Kerron Stewart set off too quickly, Sherone Simpson could not find Stewart's outstretched hand and their hopes floundered.

To add more drama, the British team, who were also threatening a medal, also got in a right muddle on the second exchange. Emily Freeman reached for the baton from Montell Douglas but failed to collect as they, too, DNFd.

Taking full advantage of the mishaps around them was the Russian quartet - Yevgeniya Polyakova, Aleksandra Fedoriva, Yulia Guschina and Yuliya Chermoshanskaya - who crossed the line to win gold in 42.31, the slowest winning time for 32 years.

Belgium, who surprised everyone by winning a bronze medal at last year's World Championships, went one better to take Olympic silver in a national record of 42.53.

Nigeria followed up their bronze medal in the women's Long Jump earlier this evening by securing a second bronze in 43.04.

Fedoriva perhaps best summed Russia's medal by adding: "We would have been happy with silver medal but we got gold."

Fraser blasted Jamaica into a slight lead after the first leg, although Jeanette Kwakye the opening leg runner for Great Britain also made an impressive start.

Down the back straight Simpson piled on the pressure and opened up a clear advantage but their challenge, as well as that of Great Britain in the adjoining lane seven, was to end abruptly.

Russia were now clear and when Guschina, who had finished fourth in the women's 400m, handed the baton safely to Chermoshanskaya victory was never in doubt.

Gevaert slightly closed the gap on the Russians on the fourth leg, but she, and her team had to settle for silver. Oludamola Osayomi anchored Nigeria to the bronze - to match their best ever previous performance in the event at the 1992 Barcelona Games.

Brazil were edged out of the medals in fourth (43.14). The fifth and last team to legitmately complete was Germany in 43.28. Poland were also disqualified.