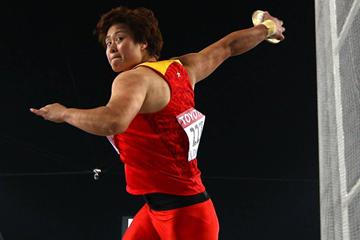 11 September 2011The 2011 Chinese National Championships in Hefei were highlighted by a 10.16 100m men’s national record by Su Bingtian. The Champs, held in the capital and largest city of Anhui Province, attracted a surprisingly good percent of the best Chinese athletes. The meet was held under cloudy and sometimes rainy sky with the temperature just above 20 degrees Celsius.

Su Bingtian, a 22-year-old Guangdong athlete, has been the number one sprinter in China since claiming the 60m national indoor record 6.56 in March. Su grabbed his first Asian 100m title in Kobe in July and then finished in third place in Shenzhen at the Universiade before winning his second national title here in 10.16, bettering the old mark 10.17 jointly held by Zhou Wei (1998) and Chen Haijian (2003). Zhang Peimeng set a good personal best 10.21 for the second place before winning the 200m title in 20.64 to a slight headwind missing the national record 20.54 by only 0.1 seconds.

On the women’s side all the ladies with top finishes from Daegu competed and naturally managed top finishes here too. Discus Throw World champion Li Yanfeng took the title in the rain with a big margin winning with 63.01m being the only athlete over 60m line. Gong Lijiao won the Shot Put with a 19.86m toss before Li Ling’s 19.08 and 24-year-old Du Xiaowei added a couple of metres to her earlier best with the first 60m result 60.26m in the Javelin. World bronze medallist Zhang Wenxiu emerged as the Hammer Throw winner after a slow start to the competition with a 70.05m throw before Wang Zheng who was second with a 68.10m season’s best.

In the distance events results were not spectacular, but still masses of personal bests were achieved. In the men’s 1500m the first eight athletes set PBs lead by Zhang Haikun in 3:41.56. Just 18-year-old Teng Haining, fresh off a second place at the Universiade 800m, lowered his PB to 3:42.05, just edging Jiang Bing who was third in 3:42.09. Teng later grabbed an easy win in the slow 800m final in 1:52.65.

In the men’s 110m Hurdles good results were achieved, too. In the absence of Liu Xiang, Shi Dongpeng won the title in a 13.41 season’s best result with 21-year-old Xie Wenjun second in 13.50. Xie had equalled his personal best 13.47 in the heats. In the 400m hurdles the fastest Chinese athlete Cheng Wen also did not compete, but Li Zhilong lowered his personal best down to 49.47 for the win.

In the High Jump 20-year-old Zhang Guowei won his first national title with a good result 2.28m. Zhang, who was 10th in Daegu, jumped a personal best 2.31m in the World Champs qualification. The Pole Vault national record Yang Yansheng won with a 5.60m season’s best with the next three athletes each setting a PB. In fourth youth athlete Zhang Wei took a big leap forward with a 5.30m result.

Zhang Xiaoyi won the Long Jump with an 8.02m jump and in the Triple jJump 26-year-old Gu Junjie returned to the top. It seems Gu wins a title every four years as he won for the first time in 2003 and then in 2007 before grabbing his third title here with a 16.78m season’s best. Wang Like, 22, won the Shot Put with a 19.61m personal best and Chen Qi won the Javelin Throw with his first throw landing at 80.76m season’s best and the second best result of his career. Yu Bin won the Decathlon with 7845 points, also a personal best.

In the 5000m the next eight finishers behind Xue set personal bests, Hao Xiaofan was second in 15:28.25 and marathon specialist Wang Xueqin, who competed in the Marathon in Daegu, third in 15:28.75 bettering her earlier best by almost 35 seconds.

The 10,000m was fast too with the first eight reaching their personal bests. Here too it was a race for Marathon runners as the first three finishers were on the Chinese team in the World Championships Marathon in Daegu. Tweny-five-year-old Wang Jiali, eighth in Daegu, was strongest in the final sprint finishing in 31:38.15 cutting 58 seconds off her previous PB from May 2011. Chen Rong, 11th in Daegu, was second in 31:39.77 and Wang Xueqin third in 31:55.31, almost two minutes faster than her previous PB.

24-year-old Fu Tinglian was a surprise winner in the 3000m steeplechase lowering her PB to 9:43.71 before Li Zhenzhu’s 9:44.02 season’s best enough for the second place. Daegu semifinalist Sun Yawei was an easy winner in the 100m Hurdles clocking 13.18 and in the 400m hurdles the best Chinese all-time (not fastest, but best) Huang Xiaoxiao made a successful return to action after injuries. The 28-year-old from Shandong, fifth at the 2005 and 2007 World Championships, won in a 56.58 result before Yang Qi’s 56.88. Zheng Xingjuan, who was sixth in Daegu, grabbed another title with a 1.88m clearance in the High Jump and Li Ling topped the Pole Vault at 4.30m. Lu Minjia was best in the Long jump with a 6.50 best jump and Xie Limei was again the best Chinese triple jumper (13.94m).