In the long distance running community, there was much to celebrate at last month’s Maraton Valencia Trinidad Alfonso.

For the first time, four women broke 2:19 in the same race. Five dipped under 2:20, another first. Both the men’s and women’s race winners, Kinde Atanaw Alayew and Roza Dereje, set Spanish all-comers' records. And all the while, the quality of the air that they, and the 23,089 other runners who started the race were breathing, was measured and monitored.

That marked just the second time that air quality was tracked during a road race of this size, the latest phase in World Athletics’ ongoing efforts to study and understand how air quality impacts quality of life, and more specifically, athletic performance.

Working in partnership with UN Environment (UNEP), the project kicked off in September 2018 when the first air quality monitoring device was installed at the Stade Louis II in Monaco, followed by similar installations at stadiums in Addis Ababa, Sydney, Mexico City and Yokohama. That project will link many World Athletics-certified tracks around the world to create a real-time global air quality database.

With its feet firmly on the ground on five continents, the project ventured outside of stadiums for the first time at the Telcel Mexico City Marathon last August where the project hit the streets running. Building on the relationship that began last January with the installation of a monitor at the Mexican Olympic Sports Center, device supplier Kunak found an enthusiastic partner in the marathon organisation, who in turn were supported by SEDEMA, the regional environment ministry for Mexico City, who was just as eager to gather as much data about the event as could be collected.

“World Athletics wants to promote a new air quality service for road races,” said Frederic Garrandes, Medical and Scientific Coordinator at World Athletics Health & Science Department. “Indeed, the air quality project is a way to enter into a new dawn for more sustainable and safer races, and for better protected health of all athletes.”

Runners in action in Valencia

“Most of the pilot project has been conducted in stadiums, with Kunak integrating air quality monitors in a number of stadiums around the world,” said Miguel Escribano, Kunak's Business development manager. “But with dozens of World Athletics Label road races taking place every year in major cities that, generally, are susceptible to large amounts of air pollution, the governing body decided to start gathering data.”

Road races in urban settings are uniquely placed to provide a treasure trove of data to scientists and researchers, given the amount of time runners spend on the course, and the varying environmental conditions they’re exposed to over that time. Since no courses, settings or their corresponding conditions are alike, the data collected will vary wildly. Mexico City and Valencia perfectly illustrated that.

One of the largest cities in the world, Mexico City has a long history of coping with air pollution challenges. Add to that the city’s unique meteorological conditions brought on by its high altitude (2250m above sea level) and surrounding mountains, and a rainy season calendar date for a race that attracts more than 20,000 runners, and you have a highly suitable case study.

So too is Valencia, which sits nearly at sea level, with about half of its flat course lying less than 200 metres from the Mediterranean. That means that winds will play a strong role earlier in the day. Its dry season date means little cloud cover from the sun that raises ozone levels and thermal stress indicators just two hours into the race.

The key objectives of the project, Escribano said, are to monitor the environmental conditions before and during a race to find out more about how air pollution impacts, first, the health of athletes and second, athletes’ performances. Then, armed with that data, World Athletics can help organisers, municipalities and local policy makers make better and more informed decisions about their events that can improve the health, safety and well-being of the athletes participating.

In Mexico City, SEDEMA installed a monitoring station at the finish line in Zocalo Square, collecting data over the course of a week to provide points of comparison with the data that Kunak’s devices collected. On the day before the race, a car with a Kunak device mounted on its roof monitored conditions along the course in typical traffic conditions. On race day, Luis Eduardo Gonzalez, a local professional cyclist, rode along the course with a mobile unit mounted on his bike.

Similarly, in Valencia a bike was used to collect data on the day before the race. ‘Bernie’, another mobile monitoring device, was mounted on the women’s lead clock car on race day. Other equipment to measure black carbon concentrations and ultrafine particle concentrations was installed at the finish.

Data from both races is still being analysed but Escribano is confident that it will serve the project's ultimate goal: to help protect runners from the negative effects of air pollution.

"That will also benefit the wider community, in fact anyone who exercises."

And interest in the project is growing.

Escribano attended the UN Climate Change Conference COP 25 in December, and participated in a panel discussion, 'Open Innovation to Tackle Climate Change', which included a presentation on the World Athletics project. The initiative, he said, was well received.

“The audience showed a great interest in the World Athletics Air Quality Project because it is not very common that a private organisation decides to lead the action towards the protection of its own stakeholders - and the general population.” 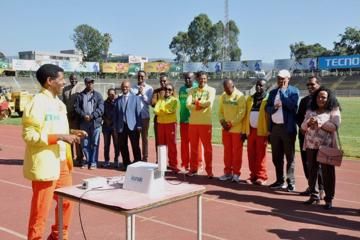 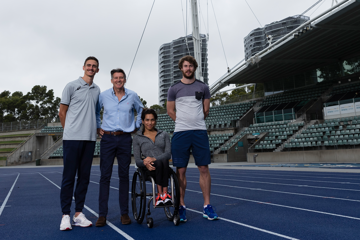 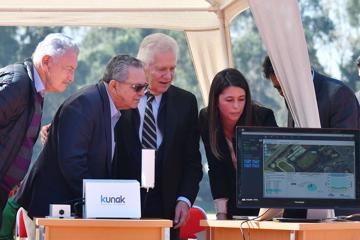 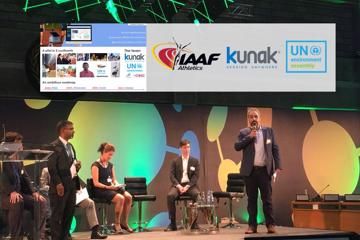 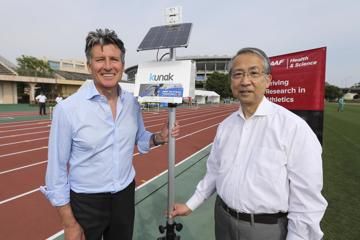 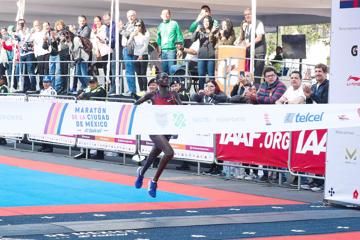 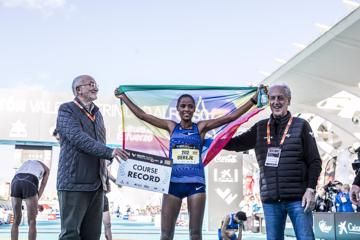