Collins’ fitness is the secret to his longevity

It has been 20 years since Kim Collins made his debut in a global event. Twenty years on from the 1996 Atlanta Olympics, and after 12 World Championships indoors and out and four Olympic Games, the St Kitts sprinter is hungry for more success on the track.

“I have been in track and field for so long that your body remembers,” said the 39-year-old at the press conference ahead of the IAAF World Indoor Championships Portland 2016. “So once I get fit, the body will be able to race. I tell the young athletes who want to get fast before they get fit that once you get fit first, it is easier for your body to last as long as mine has in the sport.”

Collins has shown superb form this this winter, running 6.55 or faster five times, including a season’s best of 6.51. “I didn’t listen to my coach and did two races in Glasgow. I suffered some cramps, but I am fine now,” said Collins ahead of his third World Indoor Championships appearance and his first since 2008. “I am ready for Friday night.”

During his two previous World Indoor Championships appearances, Collins took silver medals in Birmingham in 2003 and in Valencia in 2008. If he succeeds tomorrow on the green homestretch at the Oregon Convention Center, he will become the second man from the Caribbean to win the world indoor 60m title since Cuba’s Andres Simon won in 1989.

“Winning is the most exciting part of running – indoors or out,” said the 2003 world 100m champion. “I just try to get out of the blocks early to have a good race. I will be honest, I don’t follow our sport and the past champions. I have never come as a favourite and I love it. I come in, try to move through the rounds, make my way to the finals and the podium. I just focus on who's going to be there (tomorrow).” 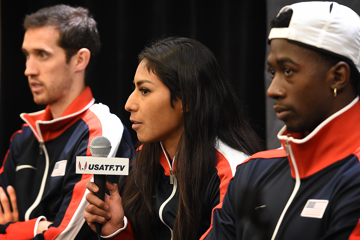 Back on home soil, Americans ready to dig dee...