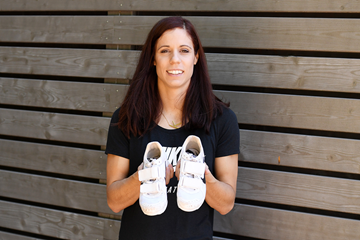 The IAAF Heritage Collection, which aims to preserve and savour artefacts from the best athletics moments to help promote the sport and help engage fans, was launched by IAAF President Sebastian Coe in Birmingham on Sunday 4 March on the last day of the IAAF World Indoor Championships.

The level of support received from the current stars of our sport since that memorable beginning has been incredible. Yet perhaps the most selfless act of generosity so far seen took place on Wednesday (4) on the eve of the IAAF Diamond League meeting in Lausanne. On that occasion, Stefanidi, the world and Olympic pole vault champion, donated the two-piece uniform in which she vaulted to gold at the 2016 Rio Olympic Games and the spikes which she wore last year when winning at the IAAF World Championships London 2017.

“I wanted to be a part of this special project which is about the legacy of athletics,” said Stefanidi. “There is nothing more important than the World Championships and Olympic Games which is why only my kit from those victories seemed appropriate if I was going to be represented in the Heritage collection.”

Stefanidi’s marvellous contribution to the collection will be on public display next year in Doha as part of an IAAF Heritage Exhibition in the lead-in to the IAAF World Championships Doha 2019.

There is already an IAAF Heritage Exhibition currently underway in Ostrava, Czech Republic. The ‘IAAF Heritage World / Continental Cup – 1977 to 2018 – Exhibition’ which opened on 5 June, as its name implies, celebrates the performances of the first competition which the IAAF created, the forerunner of the IAAF World Championships which began in 1983.

The IAAF World Cup in Athletics, which was renamed the IAAF Continental Cup in 2010, celebrates its next edition in Ostrava on the weekend of 8-9 September. The exhibition, at the Forum Nova Karolina Shopping Centre in the centre of the city, will be open until the last day of the championships.