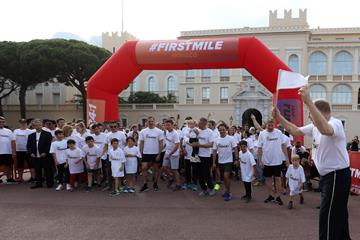 The IAAF's week-long celebration of running, which began with its Run 24-1 global relay of mile runs on Sunday, concluded with a hugely successful inaugural Athletics Family Mile Run in Monaco on Friday (7).

Some of the biggest names in the world of sport joined members of the IAAF Council, IAAF staff and other local running enthusiasts in the week's final one mile run, in an event flagged off by HSH Prince Albert II of Monaco at the Principality's Place du Palais and co-organised by the Monégasque Athletics Federation.

“It's a fabulous place to finish the 24-1,” said IAAF President Sebastian Coe. “This is our home, our headquarters. His Royal Highness, who started the race, couldn’t be more supportive of what we we’re doing here.”

“This was definitely a very positive experience,” Hakkinen, a two-time Formula 1 world champion said. “The atmosphere was great. This is a great example for people everywhere that shows that everybody can run, and showing that it’s a great sport to improve your fitness. Life is more fun when you’re fit. It’s also a great example of an event that brings people together. It was a beautiful day.”

Massa, who collected 11 wins and 41 podium finishes during his Formula 1 racing career, was equally enthusiastic.

“It's very important to do all kinds of exercising, and to show people that everybody needs to do it,” Massa said. “It's great for the body, for the heart and for the soul. And this was a great demonstration. It's important to participate.”

“A biggest asset a person can have is their body,” Di Grassi, a ten-time winner on the Formula E circuit, said. “So you have to eat well, sleep well, and exercise well. And the rest will be a consequence of this.”

“This is so important, for health, but also for life,” Fabregas, said. “You make friends everywhere. It's just a proper love story. It gave me everything. It raised me.”

“I've never done a running event like this - this was a lot of fun,” said US swimmer Andrew, a short course world champion. “It was a pretty cool event and an awesome way to encourage people to get outside and run.”

“I'm passionate about getting as many people as possible moving, active, and running,” said Radcliffe, who has held the world marathon record of 2:15:25 since 2003. “I really do believe it's given me so much in my life, in terms of fun, in terms of friends, in terms of enjoyment and in terms of health.”

“The campaign,” Ridgeon said, “is about encouraging people to just put a pair of trainers on, run their first mile and get active, and become a part of this wonderful sport of ours.”

The global campaign began on 1 June in Lanzhou, China, which hosted the 1st IAAF Global Running Conference, and continued on Sunday 2 with the second edition of IAAF 24-1, a series of one mile runs across the world. The campaign continued on Wednesday 5 June, with more than 50,000 children participating in IAAF Kids’ Mile Runs in nearly 50 countries, events coinciding with Global Running Day.

Recalling the events of the previous week, Coe added, “I was blown away by what I was watching over the week - when you get 3000 people in Delhi, eight Olympic champions in Cuba, 10,000 children across 10 cities in Angola.

“I sense that we’ve begun to unleash the potential that we hadn’t quite realised we had, latent potential that’s been sitting around for a long time. More people do what we do over the course of the week than any other activity. And I think just the speed with which this has grown has shown that there’s no reason that this shouldn’t continue to grow. I can see this becoming a major part of the sporting calendar.”