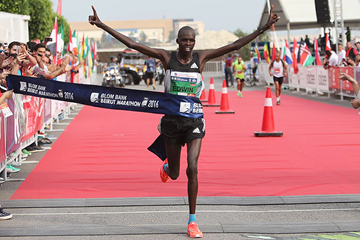 Lebanon has endured a tumultuous history which has provided long-lasting images illustrating how life once was.

Just this past week the country’s Prime Minister Saad Hariri resigned saying he feared for his life. The shocking announcement has cast political uncertainty across the Middle East once again. So how do the Lebanese react?

In record numbers apparently, as the 15th edition of the Blom Bank Beirut Marathon sets off Sunday 12 November with organisers being flooded with last minute requests to run in any of the races from the 8km fun run to the half marathon or the full marathon. The latter has been an IAAF Silver Label Road Race for the past four years.

“When we have a crisis, the fun run becomes a platform for people to express peace and unity,” says May El Khalil, President of the Beirut Marathon Association. “Every day people want to join the run. We are now up to 47,800 runners.”

The return of both male and female defending champions - Kenya’s Edwin Kiptoo and Tigist Girma of Ethiopia - represents another coup for the event. Both have expressed intent in challenging the event records held by Kenyan Jackson Limo and Muhalbat Tsege of Ethiopia at 2:11:04 and 2:29:12 respectively.

The course has undergone extensive changes which has seen a reduction in the number of turns as well as in the total elevation change. This is expected to make a difference.

While Girma and Kiptoo are expected to be tough to handle the race has attracted its strongest ever field.

Eunice Chumba of Bahrain has been on fire of late. She recorded a personal best of 2:24:27 at this year’s Rotterdam Marathon. Since then she set an Asian half marathon record with an astonishing 1:06:11 in Copenhagen and more recently, on 11 October, she upset Rose Chelimo to win the Lisbon Half Marathon.

While the course has been improved and the fields strengthened over previous years the one thing that cannot be controlled is the weather. A predicted temperature of 18C will greet the runners at the 6:30 a.m. start and that could climb to around 22C by the finish. Still, organisers underscore the event is a good old fashioned footrace, much like New York, where position supersedes the need for a fast time.

Girma won last year’s race in 2:32:44 under difficult climactic conditions and then went on to improve her personal best with 2:32:15 in Lhanzou, China. A target of 2:28 would satisfy her come Sunday.

The field also includes China’s Yinli He who has a personal best of 2:27:35 recorded at the 2015 Chongquing Marathon. Earlier this year she finished second in Wuxi in a time of 2:30:26. Another to watch is Pauline Wangui of Kenya. With a personal best of 2:30:49 (Seville in February) she will be in the mix.

Kiptoo will also find his title defence an enormous challenge with his compatriots Dominic Ruto (2:09:08 at the 2017 Rome Marathon) and Dickson Tuwei (2:09:27 at the 2016 Dongying Marathon in China) leading the charge.

Hussein Mohammed Esmael of Ethiopia also deserves attention. This will be his third consecutive year in Beirut. In 2016 he finished fourth and year earlier, third. Will it be third time lucky for the Ethiopian? But Kiptoo’s confidence was given a boost last month when he won the Breda Half Marathon in Holland in 1:00:42. He now wants to run under 2:10 here.

No matter who crosses the finish line at Martyrs Square first Sunday the event will be a victory for the people of Lebanon.