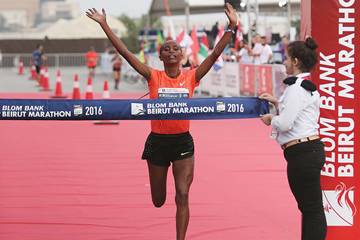 Oppressive heat and humidity conspired against athletes at the Blom Bank Beirut Marathon on Sunday (13), denying them any chance of fast times at the IAAF Silver Label Road Race.

Indeed, even before IAAF President Sebastian Coe had fired the starter’s pistol at 7:00am, the temperature had reached 21C and climbed quickly in the absence of any cloud cover, reaching 25C at the finish.

Kenya’s Edwin Kibet Kiptoo proved strongest on the day, crossing the finish line at Martyr’s Square in a time of 2:13:19 with Abebe Gizachew of Ethiopia coming in second (2:14:06).

The defending champion from Kenya, Jackson Limo, finished third in 2:15:02 to round out the podium places.

“Today was very hot and very humid,” said the 28-year-old winner. “It was a good race and I was comfortable in winning. My target was 2:09 but today you cannot run for time. The humidity, it was very hot. From 31 to 32km I looked back and there were no people behind. I was able to increase my lead to the finish.”

Two pacemakers had been charged with the responsibility of towing the field through an opening half of 1:04:30, but with the pacemakers exercising a great degree of caution, they reached halfway almost four minutes slower than expected. Not surprisingly there were nine athletes in contention at that point. Kiptoo ran the second half much faster and that proved the undoing of his rivals.

“The pace was a little slow today because of the heat,” said a disappointed Limo afterwards. “We tried to push but the time didn't come. I saw when we were halfway that the pace was too slow. I knew we weren't going to run a good time.

“I was expecting to defend my title but unfortunately I didn’t. But I am very happy with the results. At about 32km Kiptoo pushed and I tried to go with him but I had a small stitch in my stomach. I tried to close the gap to get on the podium.”

The women’s race became a solo effort shortly after the half way point as 23-year-old Tigist Girma of Ethiopia followed closely on the heels of a designated pacemaker, dropping the entire field.

The pacemaker had been expected to take Girma right to the finish but he experienced cramps and, for a short time, followed the young Ethiopian until he could run no farther.

Girma finished in 2:32:48 to claim her first ever marathon victory – she was seventh in Lanzhou in June and second at this year’s Marrakech Marathon. Despite the heat and the fact this was her third marathon of 2016, her time was a personal best.

“I am very, very happy that I won this marathon; the Beirut marathon is good for me,” she said with a smile. “The pacemaker ran well until his legs hurt and he dropped back.

“I trained very hard in preparation for this race. My coach is Haji Adilo and I train with his group with runners like Mare Dibaba, Amane Gobena and Tirunesh Dibaba. I am very, very happy.”

A broad grin creased her face when she was asked if she had expected to win in Beirut. Both she and Kiptoo will receive US$10,000 for their respective victories.

A crowd of Ethiopians, resplendent in their national colours and waving the country’s flag, were conspicuous at the finish. They had further reason to celebrate. Their compatriots Seada Kedir, who won in Beirut in both 2011 and 2012, and Alemenesh Guta rounded out the top three. Kedir finished in 2:34:12 with Guta crossing the line in 2:37:23.

More than 43,000 runners of all ages took to the streets for a variety of events from a 1km children’s run to the full marathon. IAAF President Sebastian Coe boldly took part in the 7km fun run along with Lebanese Prime Minister Saad Hariri.