Having edged closer to the title in each of her three previous attempts, local heroine Fionnuala McCormack looks primed to finally claim victory at the SPAR Great Ireland Run, an IAAF Silver Label Road Race, on Sunday (10).

The two-time European cross country champion is the star attraction at the 10km event, which will see over 7500 runners tackle an undulating course in Dublin’s Phoenix Park.

For the first time, the event will feature a head-to-head team event, with an Irish squad in both the men’s and women’s races squaring off against a Commonwealth selection.

With Great Britain’s 2015 winner Gemma Steel a late withdrawal, McCormack looks the overwhelming favourite to take the women’s title, and the 31-year-old was in confident mood when speaking in Dublin on Thursday. McCormack finished seventh in this race back in 2011, improved to fourth in 2014 and then finished second last year.

When she takes to the line on Sunday afternoon, she will have one goal on her mind: “You always have to go to win. Different years have had different line-ups in terms of strength, but each time I have to go out with the aim to win it.”

McCormack’s best result in the race was when she ran 33:07 last year to lose by four seconds to Steel, but the Irishwoman knows that with a hilly course and inclement weather expected, the only thing that matters will be her finishing position.

“It’s just a race, as opposed to trying to run fast,” she said. “It’s a race of two halves. The first half is almost too easy, and you can feel really good, but if you run too fast it can really hit you in the second half. It’s important to support races like this. There’s good history in it.”

McCormack comes into the race in sparkling form, having returned home from the USA after a stint of altitude training in Albuquerque. She finished fourth at the New York City Half Marathon last month and ran an Olympic 10,000m qualifying standard of 32:05.08 at the Stanford Invitational last weekend.

With a little over four months to go until the athletics programme gets under way at the Olympic Games, she is now considering her options between the 10,000m and the marathon, which will take place less than 48 hours apart on 12 and 14 August.

“I don’t know if it’s possible,” she said. “I’d love for it to be, but I need to look at it when the team is picked and it’s all definite. I can look better at what I really want to do or what would work best. At this point I can’t say.”

Right now, her mind is focused on the task at hand: claiming a maiden victory in Sunday’s race.

To do so, she will have to defeat Rebecca Moore, the British Universities 10,000m champion, along with fellow Briton Sophie Cowper, who finished fifth in the Trafford 10km last month. Others looking to upset McCormack on home turf include British inetrnational mountain runner Emma Clayton, who has also run 33:49 for 10km on the road.

The men’s race appears wide open, with a quintet of Irish athletes taking on a Commonwealth selection.

The Irish team is led by Mick Clohisey, who is currently qualified for the Olympic Games in the marathon, having run 2:15:11 in Seville in February.

He will be joined by fellow Dubliner Joe Sweeney, who finished fourth in the senior men’s race at the European Cross Country Championships back in 2011. Brandon Hargreaves, who has a best of 29:19.42 for 10,000m, is also likely to be in contention.

The international challenge is led by New Zealand’s Dan Wallis, who ran 1:06:24 for the half marathon in Houston earlier this year. He will be joined on the Commonwealth team by the British quartet of Owen Hind, Jaimie Roden, Andy Maud and Rob Samuel.

There will also be a men’s mile on Sunday, in which Ireland’s John Travers heads the field.

Those most likely to challenge him include fellow Irishmen Joe Warne and Rory Chesser, while the British challenge will be led by Philip Seseman and John Ashcroft. 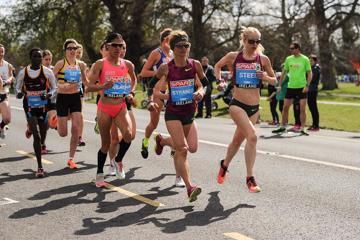