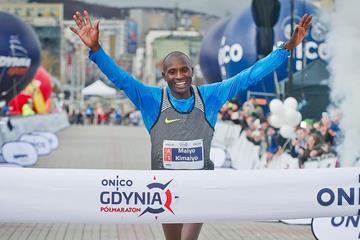 Maiyo set to defend title at Minsk half

Kenyan Hillary Maiyo will defend his title at the third edition of the Minsk Half Marathon, an IAAF Bronze Label Road Race, on Sunday (10).

The 23-year-old Kenyan established the course record with his 1:03:00 run last year, just outside of his 1:02:41 personal best set in Gdynia, Poland, in March 2016. Maiyo has contested two half marathons this year, most recently just five days ago in Pila, Poland, where he won in 1:03:27.

Kenyan Julius Kibet Koskei is also in the field, whose 1:01:21 dates back to 2011. The 35-year-old has won three half marathon earlier this year but with somewhat modest performances, the best of which was 1:04:23 in Fort Worth.

The women's field will be led by Christine Moraa Oiga of Kenya, whose credentials include a 1:11:50 lifetime over the distance set in Warsaw earlier this year. The 31-year-old clocked 1:15:29 in her most recent outing, finishing second in Pila last weekend.

Belarus will be represented well by 24-year-old Nina Savina, who clocked her 1:11:50 personal best in this race last year, and Nastassia Ivanova, the winner of April's Warsaw Marathon in 2:28:44.

The field also includes 20-year-old Adawork Aberta, the winner of January's Khon Kaen, Thailand half marathon in 1:18:14. Sitora Khamidova of Uzbekistan, who clocked a 1:14:19 personal best in April, is also in the field.