Tadese, a five-time world half marathon champion, set the world record of 58:23 back in 2010. While his last sub-60-minute half marathon was back in 2015, the Eritrean’s recent performances suggest he will still be competitive on Sunday.

On Sunday he will face the Kenyan trio of Dominic Kiptarus, Wilson Kiprono and Moses Kibet, all of whom set half marathon PBs last year. Kibet ran 1:00:44 to finish second in Klagenfurt, while 21-year-old Kiptarus clocked 1:00:53 in Lille and Kiprono won in Belfort in 1:00:57.

Two Japan-based Kenyans will also be competing. Dominic Nyairo set his best of 1:00:50 at the Marugame Half Marathon two years ago, while Bernard Kimani’s PB of 1:00:05, set in 2015, makes him the second-fastest athlete in the field behind Tadese.

The race doubles as a qualifying race for the IAAF/Trinidad Alfonso World Half Marathon Championships Valencia 2018 for Japanese runners, but many of the domestic entrants will be using it as a tune-up opportunity ahead of the Tokyo Marathon in three weeks’ time.

National record-holder Yuta Shitara is in excellent form. Eight days after clocking a Japanese half marathon record of 1:00:17 in Usti Nad Labem in September, he set a PB of 2:09:03 at the Berlin Marathon. Eight days was the same gap between his 10,000m PB of 27:41.97 in November at his victory over 10 miles in Kosa in December.

His success has continued through to this year, recording best stage times at both the New Year Ekiden and Inter-Prefectural Men’s Ekiden. The 26-year-old could be in the kind of form to improve his national record, or even challenge for victory, which would make him the first Japanese man to win in Marugame since 2006.

Daichi Kamino earned the nickname ‘mountain god’ after recording a stage record in the mountain climbing stage of the 2015 Hakone Ekiden. He finished fifth in Marugame last year in a PB of 1:01:04, which at the time put him eighth on the Japanese all-time list.

Chihiro Miyawaki, another former track specialist, is a late withdrawal. “I decided to pull out of the Marugame Half Marathon so I can be in the best possible form for the Tokyo Marathon,” said the 1:00:53 performer.

Kiplagat may not have the fastest PB of the women’s field, but the 38-year-old’s consistency makes her the slight favourite.

In between her two world marathon titles, the Kenyan set her half marathon PB of 1:07:41 in 2012. She remains highly competitive and last year won the Boston Marathon in 2:21:52 and then finished second at the IAAF World Championships London 2017.

Kayoko Fukushi set a Japanese record of 1:07:26 on the first of her two Marugame victories, but the 2013 world bronze medallist’s form has dipped since the Rio 2016 Olympic Games. Her fastest half marathon last year was a 1:15:41 clocking in Shibetsu.

US marathon champion Sara Hall is also coming off the back of a strong year, having clocked PBs of 1:09:37 at the Copenhagen Half Marathon and 2:27:21 at the Frankfurt Marathon.

Others in the field include Colombia’s Kellys Arias and Australia’s Jessica Trengove. 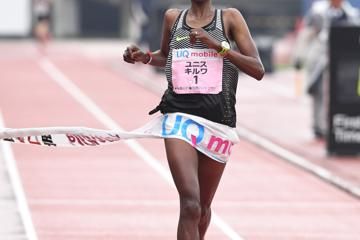 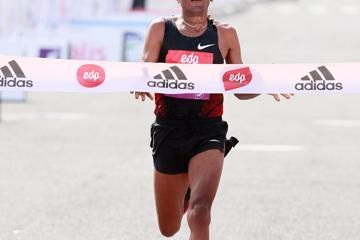