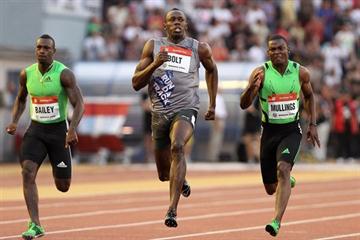 It is expected that every one of the 15,000 seats in Ostrava’s newly revamped Mestsky Stadium will be filled on Tuesday (26), largely due to the presence of one man: Usain Bolt.

The multiple world and Olympic medallist is no stranger to the Golden Spike meeting, having made six appearances at the IAAF World Challenge competition.

This year, the Golden Spike will mark the Jamaican’s first European outing of the season as he builds up towards the defence of his three world titles in Beijing. Ostrava has been a happy hunting ground for him in the past; he holds the meeting records at 200m (19.83) and 300m (30.97) and has won every race he has contested.

Speaking at a press conference on Sunday, Bolt explained that he is in “much better shape” than he was for his early season races, after completing a good month of training in which he focused on developing his explosiveness and efficiency around the curve.

He said that he will focus primarily on the 200m this season, something he believes will also boost his performances over 100m. He plans to use as many races as possible to get in shape for this year’s World Championships, which he refers to as the ‘big one’.

“I set the bar in Beijing,” said Bolt, referring to his world record trifecta at the 2008 Olympics. “I want to go there and surpass that feat.”

He will be up against former 100m world record-holder Asafa Powell. After running 9.84 in Kingston earlier this month, the 32-year-old could be in shape to challenge the meeting record of 9.83 which he set in 2010.

Part of the IAAF Hammer Throw Challenge, the main action in the stadium will be preceded by the men’s and women’s hammer competitions which will take place on Monday (25).

World record-holder Anita Wlodarczyk comes to Ostrava after recording her best ever season opener. Her world-leading mark of 77.73m lends thought to the possibility that the meeting record of 78.07m could be within firing distance.

But the pole hasn’t won in Ostrava since 2010 and she will be coming up against the German who holds the meeting record, Betty Heidler. The former world record-holder has won in Ostrava for the past four years.

In the men’s hammer, world champion Pawel Fajdek of Poland is set to take on Olympic champion Krisztian Pars of Hungary. Pars has won here for the past three seasons, setting the meeting record of 82.38m in 2012. Fajdek has never won at the Golden Spike, but his confidence will be high after throwing a world-leading 82.76m in Halle last week.

The men’s triple jump meeting record of 16.82m, set back in 1979, will almost certainly be improved on Tuesday. The man most likely to get his hands on the record is Olympic champion Christian Taylor of the USA, who moved to equal fourth on the world all-time list with his spectacular 18.04m at the recent IAAF Diamond League meeting in Doha.

World high jump champion Bogdan Bondarenko has won in Ostrava for the past two years, moving the meeting record up to 2.33m on his last appearance. The Czech all-comers’ outdoor record of 2.36m, set by Jan Zvara in 1987, also looks attainable.

Ethiopia’s world junior champion Dawit Seyaum is expected to shine in her first appearance in Ostrava. The 18-year-old currently leads the world list with the 4:00.96 she ran to win at the IAAF Diamond League meeting in Doha and is unbeaten this year.

Challenging her will be Ukraine’s Anna Mishchenko, who won at the IAAF World Challenge meetings in Kawasaki and Beijing this year. Given the form of both athletes, the meeting record of 4:03.74 could be eclipsed.

Rudisha and Kiprop move down in distance

After two early season races in Australia, Olympic champion David Rudisha will open his European campaign in Ostrava over 600m. The Kenyan world record-holder sits fourth on the all-time list over this distance, having run 1:13.71 last year in Birmingham. Rudisha may be eying the world best of 1:12.81, set by the USA’s Johnny Gray in 1986, and Joseph Mutua’s Kenyan record of 1:13.49.

World 1500m champion Asbel Kiprop will contest the 1000m for the first time in his illustrious career. Considering his pedigree at the 800m and 1500m, the meeting record of 2:15.08, set by Ilham Tanui Ozbilen in 2014, could well be attainable.

There will be significant Czech interest in both javelin competitions, especially in the women’s contest, in which world record-holder Barbora Spotakova will open her season. The Olympic champion returned from maternity leave last year to win the European title and top the 2014 world list. Here she will come up against two other new mothers, world champion Christina Obergfoll of Germany and 2011 world champion Mariya Abakumova of Russia.

There will also be much anticipation among Czech fans for the men’s 300m, which will feature world indoor and European indoor champion Pavel Maslak. The 24-year-old holds the Czech records at 200m and 400m and will have to beat 32.31 to claim the national 300m mark.

Another Czech star on show will be world 400m hurdles champion Zuzana Hejnova. In her opening 400m hurdles race of the year, she will face South Africa’s world leader Wenda Nel, who won last week in Beijing, and main home rival Denisa Rosolova.

Drahotova to star in race walk

For the first time in its 54-year history, the meeting will host a 3000m race walk, due in no small part to the success of the Czech Republic’s world junior champion Anezka Drahotova. The 19-year-old has already broken her own national 20km record this year.

Sharika Nelvis of the USA leads the entries for the women’s 100m hurdles after running a PB of 12.54 in Doha, making her the second fastest hurdler in the world this year. Britain’s European champion and meeting record-holder Tiffany Porter, who finished one place behind Nelvis at the opening IAAF Diamond League meeting of the season, will be eager to avenge her defeat.

Polish pole vault Piotr Lisek will want to make amends for no-heighting in Ostrava last year. Brazil’s Thiago Braz could provide a stern test in his first international appearance of the season while Czech vaulters Jan Kudlicka and Michal Balner should also be in contention.

In the 5000m, Olympic silver medallist Dejen Gebremeskel of Ethiopia is favoured to win in his first outdoor track race of the season. 2013 world cross-country champion Japheth Korir improved his 10km best earlier this year and could be set to break new ground over 5000m.

The women’s 200m will be headlined by 2008 Olympic medallist Sherone Simpson of Jamaica, while the leading figure in the men’s shot is European indoor silver medallist Asmir Kolasinac of Serbia.

While the weather forecast doesn’t make for pleasant reading, the quality of athletes on show will make sure that spirits are not dampened.

Jonathan Phillips (organisers) for the IAAF