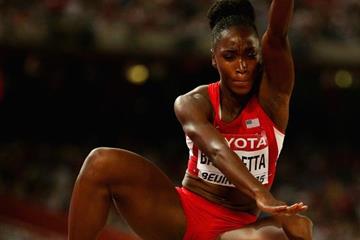 At the 2005 IAAF World Championships in Helsinki, despite the damp, cool conditions that beset so much of that particular athletics gathering, 19-year-old Tianna Madison of the United States produced a shock victory in the long jump with a personal best of 6.89m.

At the 2015 World Championships in Beijing, Tianna Bartoletta – as she became through her marriage to John Bartoletta in 2012 – regained her title after a 10-year gap, a feat only previously managed by Germany’s Heike Drechsler, who won at the inaugural championships in 1983 and again in 1993 on the home soil of Stuttgart.

Bartoletta, who had concentrated on her sprinting career during the intervening years, winning a 4x100m gold at the 2012 Olympics, followed up with gold in a stupendous competition at the Rio Olympics last summer and is now seeking to match the record of three titles earned in successive championships by her US compatriot Brittney Reese.

But that is going to be far from an easy task in what promises to be one of the showcase events of these championships. In Beijing, Bartoletta required a personal best and world lead of 7.14m to take gold ahead of Britain’s Shara Proctor, who managed a national record of 7.07m, and Ivana Spanovic, who took bronze with a Serbian record of 7.01m.

A year later in Rio there were three women beyond seven metres once again in what proved an even loftier competition. Bartoletta’s winning effort of 7.17m was almost matched by Reese, who claimed silver with a final effort of 7.15m ahead of Spanovic, who finished with bronze and a national record of 7.08m.

All the indications are that the London final could be even more competitive.

Earlier this season Spanovic delighted the home crowd in Belgrade by taking the European indoor title in a national indoor record of 7.24m, just 13 centimetres short of Drechsler’s 1988 world indoor record, and she is currently fourth in the 2017 outdoor list with 6.88m.

While Bartoletta won the US Trials with a season’s best of 7.01m, Reese leads this year’s world list with a massive effort of 7.13m set at Chula Vista in June.

Proctor has managed 6.73m this season and will be seeking another flourish on home soil, as will fellow Brits Lorraine Ugen, the world indoor bronze medallist and a consistent performer on the circuit this season who managed 6.97m indoors this year, and European silver medallist Jazmin Sawyers.

Also in the mix – Canada’s Christabel Nettey, third on this year’s world list with 6.92m, Nigeria’s Blessing Okagbare, a 7.00m jumper who has managed 6.77m this season, and the German pairing of Claudia Salman-Rath, who has reached 6.86m this year, and Alexandra Wester, who has managed 6.79m.