Langat will return to the Italian capital, having finished fourth in 1:00:06 last year. Although his PB of 59:52 from the 2011 Ras Al Khaimah Half Marathon is the fastest of the field, the elite men are closely matched.

Yego won all three of his half-marathon races in 2015 – all of which were in Italy – and set two PBs along the way, improving to 1:00:04 with his victory in Udine.

Kipyeko’s PB was also set on Italian soil. He clocked his best of 1:00:39 when finishing second at last year’s Stramilano Half Marathon.

Nine-time European cross-country champion Serhiy Lebid is the best European runner in the field. Still going strong at 40, last year he recorded season’s bests of 28:15 for 10km and 2:10:21 in the marathon.

Pacemaker Cosmas Birech will aim to run at sub-60-minute pace for the first half of the race.

Ethiopia’s Worknesh Degefa is the favourite in the women’s race. At the Ras Al Khamaih Half Marathon earlier this year she clocked 1:07:32, just 18 seconds shy of the personal best she set when winning in Prague last year.

She will take on 2010 world half-marathon bronze medallist Peninah Arusei, who finished fourth at the 2015 Roma Ostia Half Marathon in 1:09:20, and fellow Kenyans Angela Tanui and Magdalene Masai, who will make her half-marathon debut after clocking PBs of 14:58.54 for 5000m and 9:29.16 for the steeplechase last year.

About 14,000 runners will take part in the popular race which starts in the EUR district and follows a direct south-easterly route to the finish-line near the beaches of Ostia.

BACK
Pages related to this articleAthletes
Leonard LANGAT 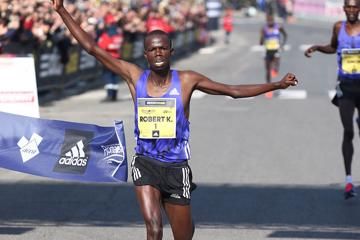