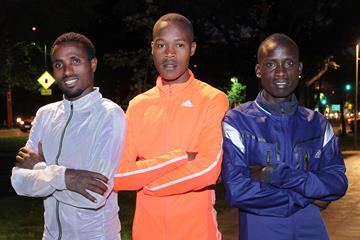 Keter and Haftu among the favourites in Santiago de Chile

The ninth edition of the Santiago de Chile Marathon, an IAAF Bronze Label Road Race, will take place in the Chilean capital on Sunday (12).

The race will start and end at the ‘Plaza de la Ciudadanía’, by the Presidential Palace. Kenya’s Julius Keter and Ethiopia’s Ehitu Kiros appear as the pre-race favourites.

Another Kenyan, Luka Rotich Lobuwan, appears as Keter’s most qualified rival. Lobuwan has a marathon personal best of 2:08:12 from Ottawa in 2013 and he recently finished seventh at the Barcelona Half Marathon in 1:02:20.

Ethiopian Haile Haja also brings a promising PB, having run 2:08:35 in Rome two years ago. But he was 17th in Hong Kong in January in 2:15:09 in his most recent race at the distance.

To date, no Ethiopian has won the women’s race in Santiago, but that drought looks set to end this year.

With a PB of 2:23:39, Ethiopia’s Ehetu Kiros is the fastest entrant in the women’s race but she finished 2014 with a season’s best of 2:34:50 in Rennes and so would need a significant improvement on that to get back to her best.

Another Ethiopian might be a better bet for victory, 28-year-old Goitetom Haftu.

Haftu has a 2:26:21 PB set four years ago in Rome and she appears to be more consistent, as she has run faster than 2:30 on six occasions.

South American record-holder Ines Melchor from Peru will return to Santiago, where she was second in 2013 with 2:32:11.

The 28-year-old finished 25th in the marathon at the 2012 Olympics and broke the South American record in her last race at the distance, finishing eighth in Berlin in 2:26:48.

The 2011 Pan-American Games 5000m bronze medallist has only participated in one competitive race in 2015, finishing fourth at the Coamo Half Marathon in 1:15:22.

The best long-distance runners from Chile and other South American nations will use the race as a qualification chance for the upcoming Pan-American Games. Chilean veteran Erika Olivera (2:32:23 from 1999) and Roberto Echeverria (2:15:37 from 2008) represent the main hopes for the locals.

The race goes around Santiago in one loop. It starts at 565m of elevation, goes as high as 665m of altitude at 32km, and then descends back to 565m. A few hills were eliminated from last year’s course in order to make the race faster.