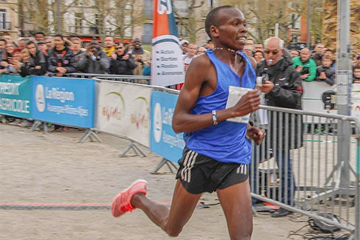 Having gained an IAAF Bronze Label for the first time, organisers of the 10k Valencia Ibercaja have designed a flat and wide circuit in the hopes that the course records of 27:52 and 30:57 will be broken on Sunday (13).

With a PB of 27:11, Kenya’s Matthew Kipkorir Kimeli will be the fastest athlete on the start line. He set his lifetime best in Prague in September 2017 and went on to better the 28-minute barrier on three further occasions in 2018, topped by his 27:19 clocking in New York in April.

The Moroccan pair of Hicham Amghar and Mustapha El Aziz should also be in the hunt for victory. The former holds a 27:46 PB, set in Prague last September, and clocked 1:00:29 at last October’s Valencia Half Marathon. 33-year-old El Aziz has a 10km career best of 27:33 and boasts a fine 59:29 half marathon PB, also set in Valencia in 2016.

Watch out too for the Ethiopian trio of Abayneh Degu, the defending champion who lowered his 10,000m PB on the track to 27:59:77 in Japan last November, Taye Girma, runner-up last year in a career best of 28:06, and Regasa Chala, who will making his debut over the distance, having a 5000m PB of 13:06:98 set last summer.

Gemechu the woman to beat

The women’s field is headed by Ethiopia’s Tsehay Gemechu Beyan. The 20-year-old set a PB of 31:07 when finishing second in Tilburg last year. She also set a half marathon PB of 1:06:50 in New Delhi one month later on her debut over the distance.

Gemechu will be chasing the course record of 30:57 set last year by Kenya’s Sandra Chebet Tuei while compatriot Hunegnaw Sillenat Yisman, a 31:42 performer, should fight for a podium place.

Rosemary Wanjiru leads the Kenyan challenge and will be aiming to improve on her current best of 31:34 set in Prague last September. She will be joined by Gloria Kite, winner at the recent IAAF Cross Country Permit meeting in Alcobendas, Susan Kipsang Jeptoo (31:59) and Evaline Chirchir (32:00).

More than 13,000 athletes will gather on the start line on Sunday. Weather forecasters predict a relatively sunny day with temperatures ranging between 9-11C at the time of the event.