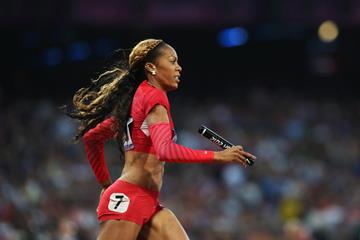 Sanya Richards-Ross in action in the 4x400m (Getty Images) © Copyright
23 MAY 2014 Preview Nassau, The Bahamas

The only teams to run faster than 3:18 in this longer championship relay since 2000 have come from the USA. With past world and Olympic 400m champion Sanya Richards-Ross anchoring the US pool, they are likely to be the favourites here again.

However, Russia are the reigning world champions and posed the strongest challenge to the USA at several recent major championships, pressing that challenge to success in their capital last year. The Russians have not sent the same quartet to Nassau as ran in the final in Moscow, but they are nonetheless likely to be one of the USA’s strongest challengers.

Jamaica again has a stellar line-up in this race, including Novlene Williams-Mills and Kaliese Spencer, and may be hard to beat should they be in contention on the final leg.

Again not to be ignored is the presence of Great Britain and their world champion Christine Ohuruogu, the mistress of the close finish.

Heats of the 4x400m will be run on Saturday with the final scheduled for Sunday.