Jun-ya Sado produced the throw of his life in the final round of the men’s javelin to take a surprise gold on the last day of the Asian Junior Championships in Ho Chi Minh City on Monday (6).

India’s Neeraj Chopra went into the javelin final as the pre-event favourite, having set an Asian junior record of 82.23m earlier this year, taking him to eighth on the world U20 all-time list. The 18-year-old was first to throw in the running order and his opening effort of 77.60m not only gave him an early lead, but it also broke the championship record.

Sado opened with 74.78m, just 67 centimetres shy of the personal best he set earlier this year, but trailed Chopra by some margin. But with his last throw of the day, Sado sent his spear soaring out to 77.97m to take the lead, coming within 60 centimetres of Genki Dean’s national junior record.

Chopra had just one opportunity with which to respond, but his final effort of 76.45m wasn’t enough to reclaim the lead. Pakistan’s Arshad Nadeem, who set a national senior record of 78.33m earlier this year, was third with 73.40m.

Sado’s gold medal was one of 13 won by Japanese athletes across the four days of action as Japan topped the medals table.

Teammates and Yoshiro Watanabe and Haruko Ishizuka made it a Japanese double in the 400m hurdles. Watanabe won the men’s title in 50.86, while national junior record-holder Ishizuka took the women’s gold medal in 57.91, winning by almost two seconds.

The other stand-out performance on the final day of the championships came from Chinese Taipei’s Yang Chun-Han in the men’s 200m.

BACK
Pages related to this articleAthletes
Junya Sado 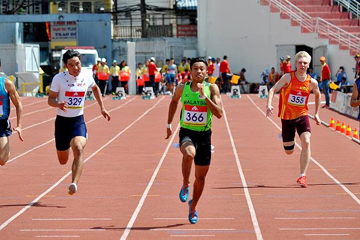