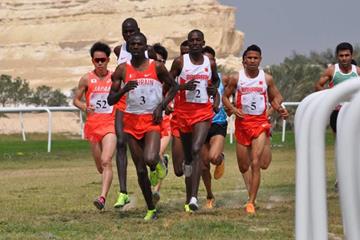 Bahrain continued their recent dominance of the Asian Cross Country Championships, taking clean sweeps of the medals in three out of the four categories and all four team titles on home soil at the 13th edition of the biennial championships in Manama on Monday (29).

The senior titles went to Albert Rop and Eunice Chumba.

Rop’s win was not much a of a surprise given his pedigree, which includes finishing 11th at the IAAF World Cross Country Championships Guiyang 2015, and he put more than 20 seconds between himself and the rest of the field before crossing the line in 32:36.

Isaac Korir took second in 32:59, having also had to settle for second in Japan two years ago, while 2014 champion Aweke Ayalew was third in 33:07.

Chumba’s win was more of an upset. She finished in 29:36 to beat established internationals Ruth Jebet and Mimi Belete, who were second and third respectively in 29:42 and 29:46.

The closest race of the day was the junior men’s event, but Ali Abdi eventually prevailed in 26:18, leading home his compatriot Desalegn Derara by two seconds, with their teammate Ibrahim Abdi a distant third in 27:11.

The junior women’s title went to world youth 1500m silver medallist Dalilah Abdulkadir Gosa who showed impressive stamina over a longer distance when she won in 21:55.

Gosa will still be young enough to run in the junior women's race at next year's IAAF World Cross Country Championships.

Her teammate Mokonin Desi came home six seconds in arrears and the only non-Bahraini individual medallist of the day was Japan’s Yuka Mukai, who was third in 22:07.

No fewer than 18 nations took part in these championships.