Ethiopia’s Hiwot Ayalew continued her good form of recent weeks and won the women’s 6.55km race at the Cross L’Acier in the French town of Leffrinckoucke on Sunday (24).

Seven days after winning the IAAF Cross Country Permit race in Atapuerca, Spain, the 2013 World cross-country silver medallist made it two wins in a row around the town’s Fort de Dunes, a set of World War I military fortifications, crossing the line in 22:30.

Ayalew had a tremendous race-long duel with Kenya’s Linet Masai, a three-time World cross-country silver medallist and twice a previous winner at the French race, before she eventually prevailed by one second; a much narrower margin of victory than the nine-second advantage she had over the same rival on Spanish soil the previous week.

However, there was some satisfaction for Kenya as Cornelius Kangogo retained his men’s title at the Cross L’Acier, winning the men’s 9.5km race in 28:07.

Ethiopians filled the next two slots behind Kangogo with Azmeraw Mengistu second in 28:14 and 17-year-old Yihunlign Adane third in 28:28.

Elsewhere in France, Italy’s Nadia Ejaffini won the women's 4.86km race in 17:53 at the 56th edition of the famous Cross Volvic in Clermont Ferrand on Saturday. She was followed home by local runner Clemence Calvin, who was second in 18:06.

In the men’s 7.39km, Kenyans took the top three places with Paul Melly winning in 24:03. Moses Kitungat was second in 24:04 and Charles Ogari third one second further back.

The third Cross della Valsugana in Levico Terme on Sunday was the selection race for Italian runners ahead of next month’s SPAR European Cross Country Championships in Belgrade and Patrick Nasti won the men’s 9km race in 29:26.

Second was Gabriele Carletti in 29:27 and third was the evergreen 39-year-old Gabriele De Nard in 29:32.

There were local successes at the 35th Cross de Toledo on the outskirts of the historic Spanish city with Mohamed Marhoum winning the men’s 9km race in 27:47 and Marta Silvestre taking the honours in the women’s 7km race in 24:48.

There was a double success for Burundian runners at the Hubert Andre Cross Country races in Camaux, France, on Sunday.

In the men’s 8.1km race, Jean-Claude Niyonizigiye won in 25:02, ahead of Belarus’s Maksim Pankratov who was 16 seconds behind. Godelieve Nizigiyimana was the best in the women’s 4.38km race in 14:51, with Ukraine’s Olena Petrova second in 15:03. 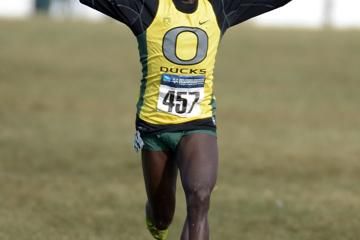