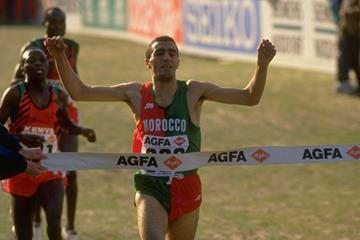 Bitzner-Ducret thrills French crowd - Skah wins but gets no points

The women's race got the crowd cheering this afternoon in Tourcoing with three runners in contention with 100 metres to go. France's Blandine Bitzner-Ducret ran a gutsy race running neck to neck with world class athletes such as World Championships runner-up Paula Radcliffe (GBR) and South African marathon ace Colleen De Reuck, surging with the finish line in view and never looking back.

Radcliffe, who occasionally works as a translator for the IAAF, could only look on and was just beaten across the line by the young Kenyan, Susan Chepkemei. 32 year old Bitzner-Ducret, coached by her husband, proved this afternoon that, on a good day, she can run with the best. "I felt great throughout the race, and I just ran with the leaders knowing that if it came to a sprint finish, I had a good a chance as anybody."

Paula Radcliffe, who surprised many people last year by taking second place at the IAAF World Cross Country Championships in Turin, is now off to Albuquerque in order to try to regain the form that was hers last season. In Marrakech, Radcliffe will want to prove that she is still the woman to beat.

The IAAF's World Cross Challenge standings are still lead by the Kenyan Jaqueline Maranga with 66 points, who was in Kenya competing in the annual armed forces’ cross country meet - where she took second place to Jane Omoro; Romanian, Mariana Chirila who finished a distant 8th today managed however to get within a point of the Kenyan and is currently second in the standings with 65 points; Radcliffe is third with 60 points.

The men's race was unfortunately marred by the lack of qualified athletes, following several last minute withdrawals, which meant that the race did not score for the Challenge.

However, this was another close finish, with former Olympic Champion and crowd favourite, Kalid Skah from Morocco taking the sprint over Kenyan, Laban Chege, who had lead most of the race. Frenchman, and up-coming triathlete, Yann Millon, currently leading the IAAF World Cross Challenge was unable to keep up the fast pace, diminished by tendon problems and finished in twelfth place.

Following the race, Skah, who was twice world cross country champion in 1990 and 1991 said that he had no plans to compete in the forthcoming World Championships in Marrkech on 21-22 March and would now be concentrating on the indoor season.

The Men's Challenge's standings are unchanged, as today's race was non scoring.

The next stop of the IAAF World Cross Challenge is in Vilamoura, Portugal on Sunday, 8th February, for the 22nd Almond Blossom cross country.

Jane Boulter for the IAAF