Damian Warner at the 2013 Decastar meeting in Talence (© Iris Hensel)

Damian Warner and Hanna Melnychenko emerged as the winners of the 37th Decastar meeting in the French town of Talence on Sunday (15), and for the latter there was double joy as she also took first place in the 2013 IAAF Combined Events Challenge.

Warner won the Decathlon with 8161, just coming out on top against South Africa’s first day leader Willem Coertzen, who was second with 8118 after a tight battle in all five events on the second day.

The first three men went over 8000 points and The Netherlands’ Eelco Sintnicolaas was third with 8018.

In the men’s IAAF Combined Events Challenge, Andrei Krauchanka held pole position in the Challenge standings before the start of the Decastar meeting and despite not being at the final event in Talence, the Belarusian combined-events exponent hung on to first place and the first prize of USD$30,000, with 25,084 points from his three scoring events.

The Moscow bronze medallist Warner, who has twice scored higher than 8300 points this year, couldn’t quite reach those height this time and had to settle for second place with 24,980 points.

By contrast, Melnychenko was already leading the Challenge standings ahead of Talence, her fifth heptathlon of the year, but her win increased her overall tally by 48 points and she ended the series with 19,310 points. Theisen Eaton was second with 19,158 points.

Coertzen, the overnight leader in the Decathlon, started his day well when he won the second heat of the 110m Hurdles in 14.38, but Warner was a clear winner in the third and last race in 13.91, his second-best time of the year, and he closed the gap on his rival to nine points.

Russia’s Vasiliy Kharlamov was the best in the Discus with 49.19m, but in the struggle for the Decathlon victory, Warner again gained valuable points against Coertzen throwing 44.92m against 43.05m and this moved him into first place after seven events, 29 points ahead of the South African.

Meanwhile, the crowd in the stadium had grown to 10,000 people and with the Pole Vault pit in front of the main stand and the crowd sitting on the track, a special atmosphere was created, primarily because of the presence of Renaud Lavillenie.

World and Olympic champion Ashton Eaton, who was in the stadium supporting his wife, said: “I have never experienced such a great atmosphere at a Decathlon or Heptathlon competition."

Lavillenie came into the competition at 5.27m and there were two other men still vaulting and all three cleared.

France’s London 2012 Olympic Games champion went over at his first attempt but it was clear that the seven events he had done earlier had taken its toll. After clearing 5.47m, he could not get over 5.67m.

Coertzen cleared only 4.27m so, after eight events, Sintnicolaas went into second place with 6567 points after vaulting 5.27m and Warner had extended his lead to 152 points with 6719.

However, Coertzen took the third individual victory of the weekend with a Javelin throw of 66.04m. It moved him back into second position after nine events while Warner reached 61.07m to retain the lead with a 101-points advantage over Coertzen after nine events. The gap between Sintnicolaas and Behrenbruch, in third and fourth place, was only 18 points.

“The atmosphere was great, but I can say just one word: I am tired,” said Warner after his debut in Talence.

By contrast, Melnychenko was making her sixth appearance in Talence and she had never previously placed better than fourth, but the overnight leader and 2013 World champion showed in the very first event on the second day that she was determined to do much better this time.

As a result, the Ukrainian extended her lead to 98 points. Germany’s Claudia Rath, fourth at the World Championships last month, produced the best jump of the day with 6.50m.

The first athlete to throw the Javelin was Norway’s Ida Marcussen, who sent her implement to 50.16m and nobody else came close to this.

Melnychenko started this event with a modest 32.36m, followed by a foul but she improved to 39.78m with her last attempt. Theisen Eaton could only claw back 47 points despite a throw of 42.24m.

In the last event of the weekend, Melnychenko tracked Theisen Eaton for most of the two laps of the track and in the last few metres she overtook her Canadian rival to finish in 2:13.94.

At the front of the race, Tyminska won in 2:08.61 and that was enough to propel her into second place, ahead of Theisen Eaton and she finished only 20 points adrift of Melnychenko.

No less than seven women scored more than 6000 points. 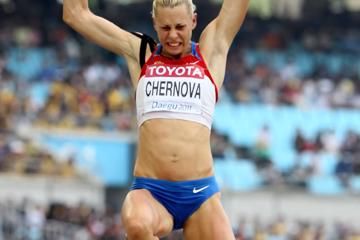 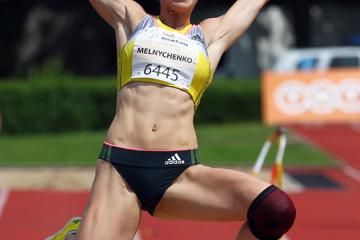