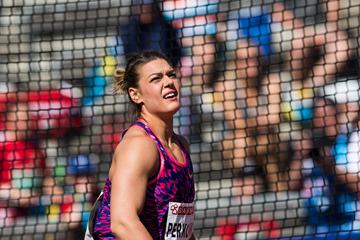 Double Olympic champion Sandra Perkovic grabbed the headlines at the Galà dei Castelli in Bellinzona with an impressive world leading mark and a national record of 71.41m, the best throw in the world since 1992.

The Croatian produced the best series of her career with another throw beyond 70 metres in the sixth round with 70.05m, two more throws beyond 69 metres (69.08m and 69.02m in rounds one and five respectively) plus 65.77m in the third and 66.87m in the fourth. It’s the first time since 1990 that someone has thrown beyond 70 metres twice and beyond 69 metres four times within one series.

“It was very important to have a consistent series of throws,” said Perkovic. “I set my previous personal best of 71.08m in Zurich when I won the European title in 2014. The atmosphere was perfect. I was expecting to throw far but it was a surprise to throw over 71 metres. The fact that I threw 70.05m in the sixth attempt shows that I am in very good shape.

The organisers of the Galà dei Castelli adopted the same format as the IAAF Diamond League meetings by holding both the men’s and women’s discus events at the same time.

USA’s Mason Finley won the men’s contest with a third-round throw of 65.48m, beating Olympic champion Christoph Harting, who produced his best throw of 63.34m in the third round.

Poster girl Mujinga Kambundji provided the highlight for the Swiss fans by winning the 100m in 11.07, equalling the national record she set two years ago at the World Championships in Beijing. Natasha Morrison finished second in 11.22 ahead of 2015 European under-23 champion Rebekka Haase (11.32).

“I knew I was in good shape but it was a little bit of a surprise,” said Kambundji. “The most recent races did not go very well. It’s a great track and the atmosphere is always very nice. I hope to break the record in London. The 4x100m ran a fast time in Lausanne and we hope to reach the final.”

“The track was very fast,” said Stowers. “The spectators are fantastic. They are always knowledgeable and supportive. It’s always a pleasure to come back to Bellinzona.”

Double European indoor champion Selina Buchel scored another win for Swiss athletics. She took the lead at 500 metres and held on to win the 800m in 1:59.85. Hedda Hymna from Norway edged Italian champion and Olympic semi-finalist Yusneisiy Santiusti by 0.03 with 2:00.14.

“At 500 metres the pace was slow and I decided to pull away,” said Buchel, who will run the 400m at the Swiss Championships in Zurich before the World Championships. “The atmosphere was amazing. I am happy that I managed to beat strong athletes but I hoped to run faster.”

“It was an important win against strong athletes,” said Sprunger, who set a Swiss record of 51.09 earlier this month. “I returned from Rabat yesterday and I was tired.”

Kenya’s Job Kinyor launched a strong kick in the final metres to take the men’s 800m in 1:45.17 ahead of European indoor 1500m champion Marcin Lewandwski, who clocked a season’s best of 1:45.44.