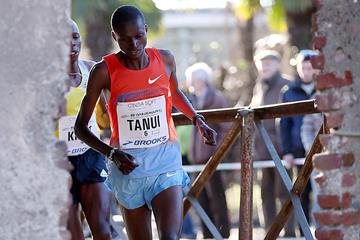 Kenyan double for Tanui and Kipyegon at Cinque Mulini

Paul Tanui and Faith Kipyegon added their names to the prestigious roll of honours on Sunday (26) at the 82nd edition of the Cinque Mulini, the eighth IAAF Cross Country Permit meeting of the 2013-2014 season.

Both Kenyans wore bib number six which the organisers traditionally give to the favourites and they lived up to their reputation with impressive wins ahead of world-class fields on a sunny but windy day in San Vittore Olona.

The lead pack were whittled down to five men as Tanui, Lokomwa, Kusuro, Edris and Kibet pulled nine seconds clear of Adane, clocking 13:05 at the end of the third lap.

Kibet pushed the pace and held the lead on the fourth lap ahead of Lokomwa, Kusuro, Tanui and Edris. Tanui took the initiative on the fifth lap, closely followed by Kibet, Lokomwa and Kusuro. Edris was dropped by six seconds by the leading quartet who went through the fifth lap in 24:33.

The four remaining men then fought it out for the win on the last lap. Kibet threw down the gauntlet inside the famous Meraviglia Mill, but Tanui followed him closely. Tanui then launched his counter attack and Kibet tried to respond but Tanui pulled away with 400 metres to go, romping home in 29:59.

Tanui held off Kibet by just two seconds, while Lokomwa, who won the Memorial Peppe Greco Road Race in Scicli last September, completed the all-Kenyan podium in third place with 30:03, two seconds ahead of Kusuro. Edris, who was side-lined by a knee injury this winter, finished a distant fifth in 30:33.

Having taken the honours at the Cross Italica in Seville last week, Tanui scored back-to-back wins in the IAAF Cross Country Permit meetings.

“It was a hard race on a challenging course with a lot of ups and downs,” said Tanui. “I appreciated the race. It was a good preparation for the 10,000m on the track. I am planning to run this distance at the Commonwealth Games in Glasgow next summer.”

Kipyegon ran at the front on the second lap, closely followed by Steel who managed to keep up with the Kenyan’s fierce pace. They went through the second lap in 8:44, three seconds ahead of Simpson.

The 20-year-old Kenyan then broke away on the third lap, opening up a two-second gap over Steele on a steep uphill section of the course.

Kipyegon, who finished fifth in the 1500m at the World Championships in Moscow and set a Kenyan record of 3:56.98 last May in Doha, produced her decisive surge on the last lap, breaking away from Steele by more than 30 seconds, crossing the line in 20:54.

“The course was hilly but I’m used to running in these conditions when I train in Kenya,” said Kipyegon. “It was a good preparation for the 1500m at the Commonwealth Games and the Diamond League.”

Steel finished runner-up in 21:28 ahead of Simpson (22:34) as the Briton improved on her sixth-place finish from three years ago in San Vittore Olona. “I ran a comfortable race today,” she said. “It was strange to run through the mills but it was a nice race. It was good preparation for running the half marathon in New York. My goal is to run the marathon in the future.”

Like Kipyegon, Simpson also used the Cinque Mulini as a training exercise for the 1500m next summer.

“It was a good foundation. I forgot how difficult cross country racing is,” said the world 1500m silver medallist. “My next competition is a 2 miles indoors in Boston. My biggest goal is to improve my 3:59.90 personal best next summer. I enjoyed this trip to Italy and I took the opportunity to visit the Violin Museum of the famous Italian violin maker Antonio Stradivari in Cremona.”