World 10,000m champion Joshua Cheptegei announced the return of international athletics with a phenomenal world 5000m record of 12:35.36* at the Wanda Diamond League meeting in Monaco on Friday night (14).

The Ugandan, who annexed the world cross-country title as well as the 10,000m title last year, and set a world 5km record on the road in Monaco in February, extended his realm by attacking and conquering the great Kenenisa Bekele’s 16-year-old 5000m monument of 12:37.35 in a bravura solo performance.

The pace was so fierce that Cheptegei had run out of pacemakers by half way and the only other man in sight was Kenya’s Nicholas Kimeli. Within a lap the genial but ambitious Ugandan was alone in his quest for immortality, pressing on remorselessly with metronomic 61-second laps.

As he hit the bell in 11:35, it was apparent that the record was his for the taking and he came home in 60 seconds as the small socially-distanced crowd allowed to attend the meeting rose and applauded.

Cheptegei had made no secret of his desire to take down Bekele’s mark and was not deterred by the seemingly unfavourably warm conditions at Stade Louis II. It was still 26 degrees and 78 percent humidity as his attempt began.

“I think Monaco is a special place and it's one of these places where I could break the world record,” he said.

“It took a lot of mind setting to keep being motivated this year because so many people are staying at home but you have to stay motivated. I pushed myself, I had the right staff with me, the right coach. I'm also usually based in Europe, but being based in Uganda with my family was actually great.”

Kimeli was the only other man who broke 13 minutes, as he finished a distant second in a lifetime best of 12:51.78.

In the clash of the distance queens, a race featuring the reigning women’s world champions over every distance from 1500m to 10,000m, 5000m title holder Hellen Obiri reigned supreme over her preferred distance.

Obiri, who is also the world cross-country champion, was the aggressor early in the race, keen to stamp her authority on the star-studded field.

With five laps to go it was a race in four with Ethiopia’s Letesenbet Gidey leading from Obiri, Laura Weightman and Sifan Hassan as they gapped the rest of the field.

World 1500m and 10,000m champion Hassan, who had been doubtful about her form coming into the event due to a long lockdown in Ethiopia, found the pace too punishing and stepped off the track at 4000m, leaving Gidey and Obiri to duel for the honours.

Obiri put on the after-burners 250m from the finish line and sprinted away to win in 14:22.12, setting a meeting record and the world lead. She was delighted to be less than four seconds from her personal best in such a disrupted year.

Gidey clocked 14:26.57 in second as third-placed Weightman set a personal best of 14:35.44 ahead of Jessica Hull, who set an outdoor Oceanian record of 14:43.80, the first time she has dipped under 15 minutes. She was one of seven women in that realm in tonight’s race.

For the moment, world 1500m champion Timothy Cheruiyot remains the main man in that classic distance but the ghost of the future shadowed him throughout the race in Monaco in the shape of 19-year-old European champion Jakob Ingebrigtsen.

The pacemakers went out hard, covering 400m in 52 seconds and 800m in 1:51.24. Although Cheruiyot went with them, he was also well aware of the young man who is destined to haunt middle distance runners the world over, and showed him utmost respect as they came off the final bend.

He expected the Norwegian prodigy to charge at him and kept something in reserve to shake off the threat, pumping his fist in delight as he stopped the clock in 3:28.45, just 0.04 outside his best time, set in the same stadium two years ago.

Ingebrigtsen burst through the 3:30 barrier for the first time, setting a European record of 3:28.68, which lifted him to eighth on the world all-time list. Third-placed Briton Jake Wightman also set a personal best time of 3:29.47.

Kipyegon, who had her first child after her 2017 World Championships triumph, has clearly returned to her very best. She spread-eagled a world-class field to win in 2:29.15, just 0.17 short of the world record of 2:28.98.

European 1500m champion Laura Muir led at the bell but Kipyegon put in an irresistible surge with 250m to go and won by almost two seconds from Muir who set a British record of 2:30.82.

Norwegian world champion Karsten Warholm, running his first race over 400m hurdles since his World Championships triumph almost 10 months ago, was equally superior, winning by more than two seconds in 47.10, the second-fastest time of his career and his seventh time under 47.50.

He achieved another of his career ambitions by maintaining 13 strides between all 10 hurdles for the first time, a step that will bring the world record of 46.78 into sharper focus for him.

“This was a very, very good season opener,” he said.

“I felt very strong, things I've been working on actually work. I had a very good finish today and I'm really happy. It's great seeing some audience, hearing the sound of the audience, and having some competitors by my side felt great.

“I did 13 strides all the way but it's not really about the strides, it's about how to keep the pace going and I felt like I did this so I'm very happy about how I completed the race today.”

The men’s 800m became an all-American affair as world champion Donavan Brazier hung tough down the straight to hold off the late challenge of his US compatriot Bryce Hoppel, with Canadian Marco Arop in third.

Brazier, who said he felt like he was running with “a target on my back”, set the fastest time of this blighted year, 1:43.15, after running a tactically astute race. He took command as they entered the bottom bend and relied on his strength to see off all challenges. Hoppel (1:43.23) and Arop (1:44.14) both set personal best times as they tried valiantly to run him down.

Lyles happy to be back doing what he loves most

In the sprints, world 200m champion Noah Lyles continued to set the pace, making best use of the newly resurfaced track to set a world-leading time of 19.76.

Lyles, who revealed recently that he struggled with his mental health during lockdown in April and was prescribed anti-depressant medication, has been outspoken about the Black Lives Matter movement in recent months and emulated the famous 1968 Olympic podium salute, thrusting one black-gloved fist to the sky when he was introduced before the race.

He made another strong statement with his feet, but if anything he was more delighted for his younger brother Josephus, who finished second (20.30) in his Diamond League debut.

“I got high expectations for myself so I'd say the race got the Noah stamp of approval but I wouldn't say it got the Noah satisfaction stamp,” he said.

“For me, being on the circuit is very good, I'm a very social person and when I can't get that, it takes away from my needs and my normal behaviour and that's where I start to feel stressed and trying to cope with that over quarantine has been very hard.”

In the field, world pole vault record-holder Armand Duplantis achieved his first six-metre jump outdoors this year but was denied his anticipated meeting with world champion Sam Kendricks, who was a late withdrawal after his poles did not arrive from the United States in time.

Mondo Duplantis, winner of the pole vault at the Diamond League meeting in Monaco

Duplantis’ mother and coach Helena took a 25-hour road trip from Sweden with his poles because they could not find an airline that could transport them to Nice Airport in time for the meeting.

Her son made her efforts worthwhile with a typically outstanding performance to win at 6.00m and raise the bar to 6.15m, which would have been an outdoor world best if he had made it.

“That (performance) was pretty important for me,” Duplantis said. “I wanted to get over six metres, I wanted to show everybody and myself that I am in six-metre shape.”

Belgium’s Ben Broeders took second with a clearance of 5.70m on a countback from Ernest Obiena of the Philippines.

Last year’s Rising Star award-winner and world silver medallist Yaroslava Mahuchik of Ukraine took a narrow victory over her compatriot Yuliya Levchenko after both cleared 1.98m in the high jump, and a slightly out-of-sorts world triple jump champion Yulimar Rojas maintained her winning record with a best of 14.27m, despite fouling four of her six jumps.

Morocco’s Soufiane El Bakkali won the final event of the night, setting the 11th world-leading performance in two hours of thrilling athletics, by winning the 3000m steeplechase in 8:08.04, from Kenya’s Leonard Bett (8:08.78).

* Subject to the usual ratification procedure 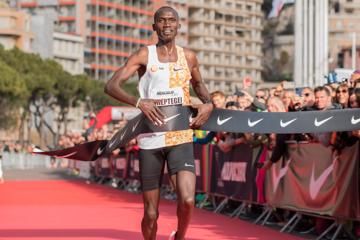