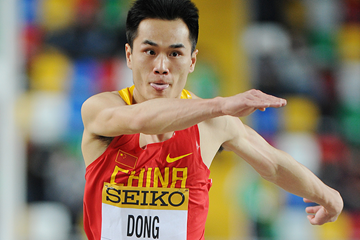 The European and US indoor seasons may almost be at an end but in China their 2013 calendar got off to a great start in Nanjing wth one Asian indoor record and five national records at a two day meeting on Wednesday and Thursday (6/7).

The 24-year-old London 2012 Olympic Games Triple Jump finalist Dong Bin, from city of Changsha in Hunan province, become the first Chinese athlete to exceed 17 metres indoors in 2011 with a 17.01m, a mark he tied when winning the 2012 Asian indoor title in Hangzhou. In Nanjing, he managed to leap out to a 17.16m Asian indoor record, erasing the 17.09m mark of Kazakhstan’s Oleg Sakirkin which has stood for more than 20 years since February 1993.

Second in the competition was a 19-year-old newcomer Zhang Yaoguang, who jumped a personal best of 16.50m to add 58cm to his previous best.

Zhang’s improvement should be merged with the fact that he comes from Liaoning province to show that National Games year is always special. The 12th National Games will be held in Shenyang, the capital of the Liaoning, in September.

In the men’s 60 metres, 23-year-old Su Bingtian reduced the national record twice. The Guangzhou athlete set his first 60m record back in 2010 in 6.58 and then bettered that in 2011 with 6.56. In Nanjing, he started by winning his heat in 6.56 to equal his own record and then bettered that by the smallest of margins with a 6.55 win in the final.

Su also owns the Chinese 100m record outdoors, he ran 10.16 in 2011. Second fastest was 18-year-old junior Wu Zhiqiang in 6.66 with 200m specialist Xie Zhenye winning the another final race the same time of 6.66 which were personal bests for the two teenagers.

Hurdler Xie Wenjun, who has already excelled in Europe in February setting a 60m Hurdles best of 7.60 in Birmingham last month, took an easy 60m hurdles win in 7.65.

In the absence of the three best Chinese pole vaulters, Yao Jie took the opportunity to add 20cm to his best when winning with 5.50m while 18-year-old long jumper Gao Xinglong took huge strides forward winning his event with a 8.02m, the leading junior indoor mark in the world this season. In a close competition, Zhao Xiaoxi was second with a 8.00m personal best and Zhang Yaoguang third with 7.97m.

In the men’s Shot Put, another Liaoning athlete was victorious with a big improvement as 26-year-old Liu Yang won with 19.50m, 63cm more than his outdoor personal best set in 2012. In the heptathlon, Xu Qinglei won with 5741 points missing, just missing the national indoor record by 22 points.

However, the biggest news in this event was in second place where the 16-year-old Wang Rong achieved a personal best of 6.43m.

Wang is a clear medal favourite in both Long and Triple Jump at the 2013 IAAF World Youth Championships, maybe even more so in the latter because she won that event in Nanjing with an outstanding 14.09m.

In the Shot Put, the top Chinese duo of Gong Lijiao and Li Ling, who were third and fourth respectively at the London 2012 Olympic Games did not compete, but another Olympic games finallist from last summer, Liu Xiangrong, set a good 18.81m indoor personal best to win.