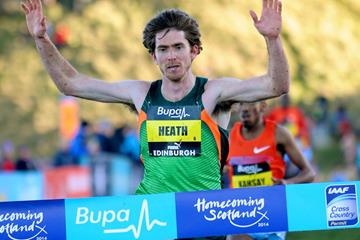 It was a day for the USA at Holyrood Park on Saturday (11) as Garrett Heath upset African stars Asbel Kiprop and Kenenisa Bekele in the invitational 4km race at the Bupa Great Edinburgh Cross Country, an IAAF Cross Country Permit meeting.

Chris Derrick then surged to a commanding win in the 8km race, which was part of the team event involving the USA, Great Britain and Europe. Although there were no African runners in the team events, the best athletes from Europe were present.

In perfect sunny conditions, Gemma Steel took the women’s 6km race as the team competition was won by hosts Great Britain with 159 points ahead of Europe (172) and the USA (203).

With Tariku Bekele out injured on short notice, the men’s 4km race was expected to be a two-horse race between Kiprop and Bekele, but it turned out differently.

While Kiprop was running at the front of the first group of six athletes, Bekele kept at the back and never moved ahead. Preparing for the Paris Marathon with high mileage of up to 240 kilometres per week, it became obvious that the 31-year-old lacked some speed.

In the middle of the race it was then Britain’s Jonathan Taylor who took the lead and was about five metres ahead. Kiprop closed the gap and after Taylor finally dropped back to seventh, the world 1500m champion looked the likely winner.

With about 800 metres to go, Kiprop was leading together with Heath and world youth steeplechase champion Meresa Kahsay of Ethiopia. At this stage Bekele was about 15 metres behind and out of contention for victory.

“I was looking for Bekele because I expected him to attack,” Kiprop said after the race. “So I was surprised that it did not happen.”

But there was another surprise in store. Heath moved ahead with about 250 metres to go and there was no stopping him. The 28-year-old won in 11:51 with Kahsay second (11:52) and Kiprop third (11:58). Kenya’s James Magut was fourth in 12:00, one place and two seconds ahead of Kenenisa Bekele.

“I just put my head down, sprinting and hoping that nobody would come past me,” said Heath after one of the most significant victories of his career. “This is of course a great start into the new year and it will give me confidence.”

There was no disappointment for Kiprop. “It was my first race of the season, so a third place is good for me,” said the Kenyan, who had been involved in a car accident at the end of November. “But I was not injured and after a short break I was able to resume training.”

“It is not a result with which I am happy, but because of my marathon training I had no time to do speed work,” said Bekele. “The speed was missing today.”

Derrick runs away with 8km title

There was another US surprise in the 8km race in Edinburgh after it was dominated by Chris Derrick.

The 23-year-old US cross-country champion, who was 10th at the World Cross Country Championships in 2013, ran away easily before half way. About 20 metres behind him, Britain’s Andy Vernon and Belgium’s Bashir Abdi were running together and further behind there was another group headed by defending champion Bobby Mack of the USA.

But Abdi and Vernon were not strong enough to challenge Derrick, who was in control during the second half.

“I was a bit surprised that no one went with me. I knew that Alemayehu Bezabeh ran a very good race at the European Championships and I expected him to be strong,” added Derrick, who will now prepare for the US Cross Country Championships. “In the summer I will run 1500m and 5000m and I plan to run the 10,000m in Brussels.”

European Champion Bezabeh of Spain was clearly not in the form of one month ago, finishing ninth in 24:48, while European silver medallist Polat Kemboi Arikan of Turkey did not make it to the starting line in Edinburgh.

There was no hat-trick for Ireland’s Fionnuala Britton at the Edinburgh Cross Country as the winner of the past two editions finished second in the 6km race behind Britain’s Gemma Steel.

With two kilometres to go on the hilly terrain, the pair had an advantage of three seconds. Britton and Charlotte Purdue were in third and fourth positions, with European cross-country champion Sophie Duarte of France following a step behind.

When 19-year-old Gorecka was tiring on the final lap, Steel broke away and won in 20:35. Britton overtook Gorecka for second place (20:44), but the youngster managed to hang on to third place (20:51).

Duarte was not as strong as at the continental championships and finished fourth in 20:57, just ahead of Purdue (20:59). “I was a bit surprised (that there was not more of a challenge by the others),” said Gemma Steel.

Athletes in the junior races collected points for the team event as well. Europeans filled the top two spots in the junior men’s 6km. France’s Alexis Miellet was the winner in 19:07, followed by Italy’s Yemaneberhan Crippa (19:14) and USA’s Michael Maton (19:16).