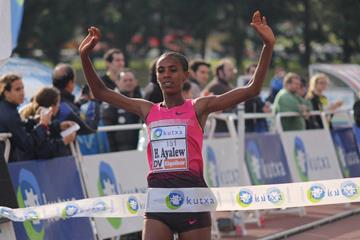 Ayalew, whose older sister Wude won this race in 2012, arrived in gleaming form having won the prestigious 'Campaccio Classica del Cross' in San Giorgio su Legnano on Monday, but the steeplechase specialist was given a sterner test on this occasion.

Given the calibre of the field, it was maybe surprising her most persistent challenger was her 18-year-old team-mate Alemitu Haroye, who is yet to break 15 minutes for 5000m.

Ayalew forged a winning gap in the last 400m, crossing the line in 21:59 with Haroye, who turns 19 in May, finishing only three seconds in arrears to the sub-9:10 steeplechaser.

Haroye will be too old for the junior race at next year's IAAF World Cross Country Championships but she is eligible for this year’s IAAF World Junior Championships. Finishing ahead of two accomplished Kenyans with 5000m PBs half a minute faster than hers indicates she is on course for a medal in Eugene, not to mention a vast improvement on her 15:05.08 5000m PB.

Marathon specialist Alessandra Aguilar was the first Spaniard to finish in fifth in 22:47.

A first for Uganda

The race followed a similar pattern to the women’s race with a large group intact through the opening stages before the African triumvirate stepped it up with a succession of sub three-minute kilometre splits which put paid to the hopes of the domestic runners in contention in the first half.

Defending champion Conseslus Kipruto from Kenya, held back by a stitch, was the first to lose ground before team-mate Emmanuel Bett followed suit soon after.

Toroitich was left in the clear for a decisive victory as the runner-up in Amorebieta last week stopped the clock at 32:04 with Bett second in 32:11.

Kipruto faded in the closing stages but clung on for third in 32:25, one second ahead of Ayad Lamdassem, who narrowly missed his second successive podium finish in this race.

Ayalew and Toroitich received their prizes from Antonio Serrano, the last Spanish winner of the men's race in 1989.

Robert Ndiwa took an unrivalled gun-to-tape victory over the undulating 9.070km course at the 37th edition of the 'Cross della Vallagarina' on Sunday (12).

The 24-year-old, who spends much of the year training and racing in Italy, crossed the line in 27:01 with his closest challenger, Yassine Rachik from Morocco, a gaping 29 seconds adrift.

Michele Fontana, who was the first domestic runner in San Giorgio su Legnano on Monday, replicated this feat to comprise the podium in 27:38.

Cheruto, who was thought to be competing internationally for just the second time, ran a sensible race, sitting back in the early stages while her compatriot Rebecca Jepchirchir made the early running.

After an impetuous start, Jepchirchir was reeled in and drifted back to 13th while Cheruto came through to take the plaudits in 21:41, comfortably ahead of Weissteiner, who is thinking about making her marathon debut at some stage this year, second in 22:09.