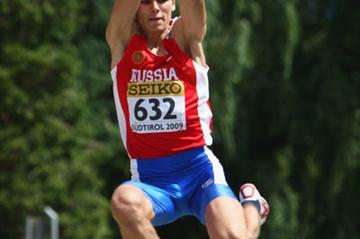 Bressanone/BrixenWith two events to go in the boys’ Octathlon, Russia’s World Youth leader Maksim Fayzulin reclaimed the lead he had handed to Germany’s Steffen Klink overnight with a superb display in the 110m Hurdles worth 968 points (field’s fastest time of 14.05) and a decent 1.98 clearance in the High Jump.

Fayzulin now stands at 4962, 52 points clear of Frenchman Kevin Mayer who leapfrogged from fourth overnight to runner-up following his superb 2.04 third time clearance in the High Jump. Despite a poor 1.89 effort, Klink still holds the bronze medal position but he now has only 14 points to spare over Qatar’s Mohd Ahmed Al-Mannai.

A series of falls and false starts took centre stage in the first round of the boys'110m Hurdles which saw the qualification of World Youth leader Gregory McNeill with the morning’s fastest time at 13.49. Of the 24 qualifiers, 18 set new personal bests or season’s best with Jack Meredith of Great Britain improving to 13.50 and Dongqiang Wang of China to 13.51.

It was however heat five which drew the most attention as Germany’s Gregor Traber who is the second fastest youth in the world this year with a personal best time of 13.58 was disqualified for false starting.

The German federation filed a protest which was supported by the IAAF Jury of Appeal on the basis that the technical data didn’t support the human decision and therefore reinstated Traber. As a consequence the 16-year-old will have to run the race alone this afternoon at 17.36 and can qualify by time. Should he clock one of the 24 fastest times he would advance to tomorrow’s semi finals and because the track does not have a ninth lane South Africa’s Layne Scheffers who is currently the last qualifier at 14.12 would be downgraded to 25th position.

After seven heats in the girls’ 800, twenty four athletes were selected to advance to the semi finals and these included World Youth top three of the season with Alawia Maki Andal of Sudan, winner of heat one, Rose Mary Almanza of Cuba, winner of heat three and Anastasiya Tkachuk of Ukraine who was safe in second position in heat five.

Other major qualifiers included Ireland’s Ciara Mageean who proved her strength in dominating heat six and the second Ukrainian Olha Lyakhova just as dominant in the second race.

In the final heat Oriel Hardman of Great Britain who was expected to be a force to be reckoned with in the final held a comfortable second place for most of the race, only slipping into third with 60m to go behind Luxembourg’s Charline Mathias and Cuba’s Dayrina Sotolongo. Due to the slow pace of her qualifying race Hardman failed to progress leaving Rowena Cole, one of the two athletes competing in Bressanone who are supported by Double Olympic champion Kelly Holmes, as the only British representative in the next round.

15-year-old Isiah Kiplangat Koech, the World Youth leader at 7:55.5 led the qualifiers in the boys’ 3000m after an easy display of distance running. The Kenyan’s 8:08.44 in heat 2 led runner up Simon-Pierre Niyukuri and third placer Goitom Kifle to new personal bests of 8:09.76 and 8:14.23 respectively.

His compatriot David Kiprotich Bett was in a class of his own winning the third and last heat in 8:13.04 after taking command of the race from the gun. His margin of over 15 seconds over runner-up Kazuto Nishike of Japan is an understatement of what is yet to come in Sunday’s final.

In heat one, 16-year-old Ferku Feysa who is the only representative for Ethiopia in this event had opened in style with a fast finishing 8:13.43, over six seconds ahead of Kibet Soyekwo of Uganda.

It will not be a surprise to see these two dominant African nations who have won a title each alternatively in this event since the creation of the competition back in 1999, battle it out for gold. If the pattern is to be followed, Ethiopia should have the upper hand after Kenya won it every four years in 1999, 2003 and 2007 leaving their historical rivals with the 2001 and 2005 titles…

The boys’ 1500m opening round concluded the morning session with no major surprises with yet again Kenya and Ethiopia top of the qualifiers with respectively Gideon Kiage Mageka and Calen Mwangangi Ndiku for the red, black and green and Girma Bekele and Zebene Alemayehu for the green, red and white.

Morocco and Australia will also have two runners in the final as Great Britain’s Jonathan Hay was the fastest non qualifier at 3:55.61.

3.85 is enough for pole vaulters

The finalists for the girls’ Pole Vault were decided 10 centimetres below the required qualification standard as 3.85 was sufficient to advance to Saturday’s final. The World Youth leader with 4.18 Michaela Meijer of Sweden only needed two jumps to get the job done, an opening effort at 3.75 and an easy clearance at 3.85.

In group A Ukraine’s Kseniya Chertkoshvili packed her bags with the same clean sheet and only two jumps to her credit. Austria’s Kira Grünberg and Hungary’s Felicia Horvath were the other athletes who did not fail a jump in this morning’s qualification round.

Third best on the entry lists, Angelica Bengtsson came close to drama as she needed three attempts to make it over 3.85. Eventually she was the twelfth qualifier by virtue of one less failure than Maja Blazej of Slovenia who was to be content with thirteenth position albeit achieving a new personal best of 3.85.

USA’s Kortney Ross, who was the equal third on the entry lists was not as lucky as the 16-year-old Californian failed three times at 3.85. The other major casualty of the day was Finland’s Reetta Hamalainen who was way below her 4.00 personal best with her daily best effort at 3.50.

Infield, the boys’ Hammer Throw qualifying rounds took centre stage. World Youth leader Vasilios Siakoulis of Greece struggled to get into gear and eventually advanced to tomorrow’s final with his second round 68.38 which is 5 full metres off his personal best. Evgeniy Korotovskiy didn’t have an easy morning either but managed to make it past the opening round with a 68.63 first attempt, him too lying over 5 metres off his best effort of the season.

The inform strong boys this morning included USA’s Alec Faldermeyer who needed just one attempt to advance at 69.31, Hongqiu Chen of China who also made it with his opening 71.32, a new personal best and Slovakia’s Tomas Kruzliak also through with his 70.22 opener.

The major casualty was France’s Quentin Bigot, seventh in the World Youth lists for the year whose 65.33 metres was the first non qualifying mark. No fewer than 7 athletes including USA’s Bradley Bolton and local favourite Claudio Salvaggio recorded three fouls.

Five finals and the two remaining events in the Boys’ Octathlon will be contested in this evening session.