Long jumper Anna Jagaciak and javelin thrower Lukasz Grzeszczuk both set Games records in winning their events on Thursday (12), the third day of athletics at the Francophone Games in Nice, helping Poland close the gap on France on the medals table.

The Long Jump was particularly exciting as the lead was exchanged several times. Jagaciak opened with 6.47m but was bumped from the leading position in round two as Romania’s Alina Rotaru went out to 6.54m. In the following round, Poland’s Teresa Dobija broke the Games record by 10 centimetres with 6.66m. Jagaciak was momentarily relegated to the bronze medal position but improved to 6.62m on her third attempt to move back into second place.

Rotaru then jumped a wind-assisted 6.57m in the fourth round as Canada’s Christabel Nettey consolidated her fourth-place position with 6.53m. But then Jagaciak produced the best mark of the day with 6.68m, breaking the Games record set moments earlier by her compatriot.

Dobija responded with 6.65m on her final attempt, but it was just shy of Jagaciak’s leading mark. Nettey, meanwhile, saved her best for the last round and sailed out to 6.63m to push Rotaru out of the medals.

In the highest-quality competition ever witnessed at the Francophone Games, four women surpassed the previous Games record of 6.56m set back in 1989.

Poland picked up their second gold medal of the day in the men’s Javelin. Lukasz Grzeszczuk, who improved to 83.98m earlier this year, was the outstanding favourite. After a foul in the first round, his second throw went out to 75.13m to take the lead.

Grzeszczuk improved to 78.62m with his next throw, adding more than a metre to the Games record set at the last edition of these championships in 2009. Canada’s Curtis Moss was the only athlete who could get close, throwing 76.04m in the last round, but even that was more than two metres adrift of Grzeszczuk.

Romania’s Ancuta Bobocel successfully defended her title in the 3000m Steeplechase, taking almost 20 seconds off her own Games record in the process. As she often does, the World Championships finalist front-ran her way to victory and crossed the line in 9:46.82, almost two metres clear of fellow World finalist Salima Alami of Morocco, who finished in 9:48.53.

French champion Floria Guei was easily the fastest in yesterday’s 400m semi-finals, but in today’s final she was pushed all the way by team-mate Marie Gayot. Just 0.02 separated the pair on the line, Guei winning in 52.31.

World bronze medallists Canada took gold in the men’s 4x100m in 39.14. Surprisingly, it was only the second time in the history of the Francophone Games that Canada had triumphed in this event; their previous victory coming in 1994.

African champion Rababe Arafi led a Moroccan one-two in the women’s 1500m. Poland’s Katarzyna Broniatowska led for the first lap before Canada’s Kate van Buskirk took up the running. But on the final lap Arafi came through to take the win, holding off compatriot Siham Hilali, 4:18.70 to 4:18.89.

After bronze in 2005 and silver in 2009, Suzanne Kragbe Kazai of the Ivory Coast finally topped the podium in the women’s Discus. She took an early lead with 52.40m on her first attempt, then improved to 52.53m on her next throw.

Lucie Catouillart of France then moved in front in the third round with 53.12m, but Kazai responded in round four with 55.33m. Her best throw of the series came on her penultimate effort as she threw 55.58m to consolidate her lead.

The Decathlon got underway today and after five events two athletes are tied on 4019 points.

France’s Bastien Auzeil, the only entrant to have broken 8000 points this year, led after the first three events, having set a PB of 7.34m in the Long Jump. But a poor High Jump of 1.89m proved costly as Montenegro’s Darko Pesic moved into the lead.

Pesic is 129 up on his best ever day-one score, while Auzeil is 79 points down on the pace he set when scoring his 8022 PB earlier this summer. 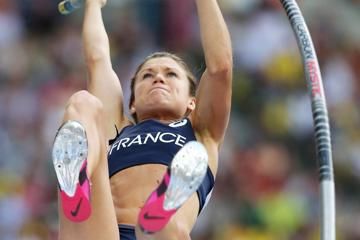 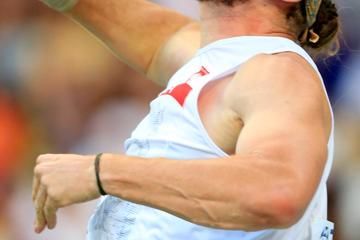 Majewski and Fajdek get Poland off to a great...