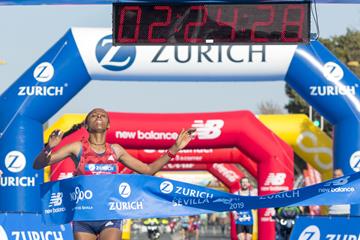 Running in nearly ideal weather conditions, the 22-year-old Tsedat clocked 2:06:36 to improve the race record by 1:07. Likewise Shone’s winning time of 2:24:29 broke the course record by a similar difference, 1:06.

Both men’s and women’s contests had strong depth as five men ducked under 2:07 while four women ran inside 2:27 as the new circuit proved to be even faster than the previous one.

The men’s race opened at a steady pace of 3:00m per kilometre, led by the pacesetters Okubay Tsegay of Eritrea and Kenya’s Kenneth Kiplagat. Thirteen athletes travelled in the main group at the 10km point which was reached in 29:56 with Kenya’s Daniel Kipkore Kibet plus the Ethiopian group of Tsedat, Belay Asefa and Birhanu Berga running closest to the pacesetters.

Like a Swiss clock, the Madrid-based Tsegay went through the halfway point in 1:03:18 with ten men still running at his shoulder. By the 27th kilometre it was Kibet who moved to the front to maintain the rhythm, sharing the lead with Tsegay by 30 kilometres, reached in 1:30:09. Surprisingly, the Eritrean, a 2:09:56 performer, didn’t quit the race at that point and ran on with relative ease.

By then the main group included Tsegay, Kibet and the Ethiopian trio of Tsedat, Asefa and Berga, with the race record of 2:07:43 seemingly well within reach. The pace continued at a face tempo, sticking to around 3:00 per kilometre.

The key movement came in the closing kilometre when Tsedat launched his attack. First Kibet and then Tadese fell back while Asefa and Berga followed behind in single file, but unable to maintain the pace. Tsedat cross the line in 2:06:36 to obliterate his previous lifetime best of 2.09:26 set last year in Barcelona while Asefa (2:06:39) and Berga (2:06:41) secured an Ethiopian podium sweep, also improving their career bests.

Meanwhile Tsegay, the designated pacemaker, crossed the line in 2:06:46 to break the Eritrean record and obliterate his previous best. Tsegay trains in Madrid under the guidance of Jerónimo Bravo, the coach who led Zersenay Tadese to the world half marathon record of 58:23 back in 2010.

In the women's race, it was Spanish marathon runner Roger Roca who was given pacing duties on track to break the 2:25:35 record set last year. He set a steady 3:26 per kilometre pace to go through the opening 10,000m in 34:25 with ten women following closely.

The leading quintet passed 30 kilometres in 1:43:17, still led by Roca and well on schedule to set a new race record. Shone and Gebremeskel proved to be the strongest as they comfortably led by the 35-kilometre point, still on track for a sub-2:25 performance.

Then Shone, one of Tirunesh Dibaba’s training partners, made her move, reaching the 40km point in 2:17:03 with a 12 second advantage over Gebremeskel. The 27-year-old injected an even faster pace over the closing kilometres to romp home in 2:24:29, less than one minute outside of her PB set four years ago. Gebremeskel clocked 2:24:53, improved her previous best by more than five minutes.

Mazuronak, who raced to the European marathon title in the event last year and finished fifth at the 2016 Olympic Games, cruised to a convincing victory in 2:26:13, to clip more than three minutes from the previous course record of 2:29:37 set by Ethiopia’s Gulume Tollesa last year.

In the men's race, the 32-year-old Kenyan clocked 2:09:20, well inside Ethiopian Melaku Belachew's 2:10:31 course record set in 2017. Kiptum also shaved one second from the career best he set in Buenos Aires last September.

Kiptum, who was third in this race last year, was nearly as dominant as Mazuronak, finishing nearly two minutes ahead of Wolde Dawit who prevailed in a close battle for second, clocking 2:11:11. Tadese Getachew was one second back to finish third, with Kenyan Joel Kimurer Kemboi fourth in 2:11:13.