Omar McLeod’s national record in the 110m hurdles ensured that the final two days of the Jamaican Championships, which concluded on Sunday (25), matched the excitement of the first two days.

The Olympic champion was undoubtedly the standout performer of the four-day championships, which was being used to select Jamaica’s team for the IAAF World Championships London 2017.

McLeod recorded this season’s first sub-13-second time in the 110m hurdles en route to his third consecutive domestic title. His winning time of 12.90 (0.7m/s) catapulted him to joint fifth on the world all-time list.

The signs of something special happening in the final were evident from McLeod’s semifinal outing almost two hours earlier, in which he hardly broke sweat when coasting to an easy 13.18 win.

In the final, McLeod had Ronald Levy, the third fastest Jamaican, on his immediate right. After the pistol went, Levy started out purposely going stride for stride with the world indoor champion until the fourth hurdle when McLeod began shifting gears. From thereon it was a matter of watching the scoreboard and waiting on the wind gauge reading which, when its legitimacy was confirmed, brought unrestrained joy from McLeod and the ecstatic crowd on hand.

“It was a great race, I wanted to show my home crowd what a sub-13 looks like,” said McLeod after recording the fastest time ever on Jamaican soil. “My coach wanted 12.8 and I know he’s not going to be happy but I got a PR and national record. I was just told I’m now the fifth fastest man in history; I’m just excited for what lies ahead.”

Levy (13.13) held off the former national record-holder Hansle Parchment (13.19), who came through with a late charge from lane eight. The other big story of that particular race was 17-year-old De’ Jour Russell, who skipped the U18 finals earlier in the day to compete against the seniors.  Russell produced a lifetime best of 13.32 – the fastest time in history by an U18 athlete over the 107cm barriers – to relegate Olympic semifinalists Andrew Riley and Duece Carter to fifth and sixth respectively.

Many local fans saw both the men’s and women’s 400m as the must-see events at the Jamaican Championships and the main protagonists did not disappoint on the final day of competition.

World and Olympic bronze medallist Shericka Jackson came up against one of her fiercest rivals from her teenage years in NCAA champion Chrisann Gordon of the University of Texas.

Jackson threw down the gauntlet in the first semifinal with a 50.48 season’s best win over the experienced Novlene Williams-Mills (50.62). Gordon, not to be outdone, responded in kind with a commanding 50.30 personal best run to win the second semifinal. The stage was set for an explosive showdown on the final day.

Jackson, drawn in lane five, got out fast and controlled the race coming off the top curve, but she soon had Gordon and Williams-Mills for company. All three were involved in a keen tussle until Jackson, with about 30 metres to go, used her superior speed to break away and take the win in a season’s best of 50.05. Gordon, just like she did in the semifinals, revised her PB to 50.13 to clinch second to finish 0.01 ahead of Williams-Mills.

“I’m really pleased with my performance today,” said Jackson. “I have a lot of speed and once I hit the home straight I knew I’d run away with it.”

“I’m so thankful for this, because over the years I’ve always been getting fifth and sixth, but this time around I got second and I’m so grateful,” said Gordon.

In the men’s equivalent, the two fastest Jamaicans this season, Nathon Allen and Demish Gaye, came face to face to settle the score.

Allen, a languid runner who possesses deceptive speed, began to make his move on the back straight while Gaye on his inside seemed unfazed by the move and continued to run at even pace. With approximately 120 metres to go, Gaye stepped on the gas and came forward, but Allen fought gallantly to the finish line and scored a narrow win in 44.58 to Gaye’s PB of 44.64.

Allen, a runner-up to USA’s Fred Kerley at the NCAA Championships, was happy with the win. “I came to make top three,” he said. “Before the race my left hamstring started pinching me. I decided it was either I didn’t finish or I win, so I just went and gave it my all.”

“It was a great race,” added Gaye after suffering his first loss of the season. “I think I made my move a bit too late.”

Commonwealth champion Rasheed Dwyer finished second in 20.26 while 2013 world silver medallist Warren Weir was third in 20.39. Having missed out on the 100m final on Friday, Nickel Ashmeade joined the growing list of experienced athletes who will miss World Championships after finishing sixth in the 200m in 20.75.

World 100m hurdles champion Danielle Williams became the fourth fastest woman this season by winning her specialist event in a PB of 12.56 (0.4m/s). The fast-starting Megan Simmonds was second in 12.63, also a personal best, while 2013 world U18 champion Yanique Thompson chopped more than three tenths off her PB to clinch third in 12.69. Thompson had fractured her right wrist on 20 May at the Jamaica International Invitational and only took the cast off on the second day of the championships.

On the infield, world leader Fedrick Dacres won his third straight discus title with 66.52m. Traves Smikle was second with 63.26m. “Today I didn’t get the distance I wanted,” said Dacres. “My rhythm was off plus the conditions weren’t great.”

Fresh from her NCAA success for Kent State University, national record-holder Danniel Thomas added the domestic title to her trophy cabinet with an 18.80m effort to win the women’s shot.

Caniggia Raynor added two centimetres to his own national record, winning the hammer with 70.93m.

BACK
Pages related to this articleAthletes
Omar MCLEOD 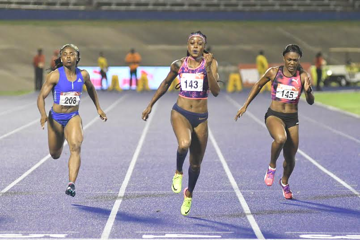 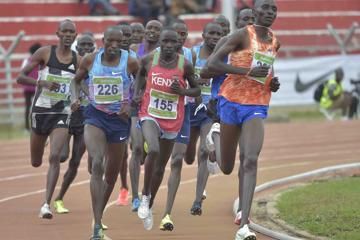 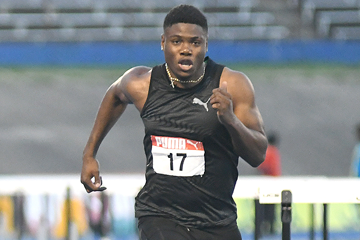 Russell and Davis impress at Jamaican U20 and... 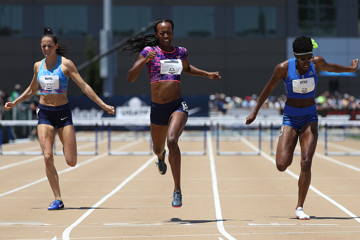