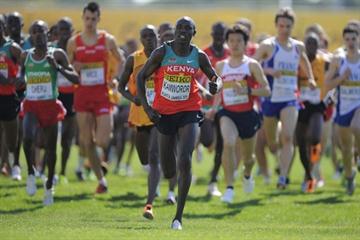 Both institutions selected their teams for the KCB/AK National Cross Country Championships in Nairobi on 16 February, which is also an IAAF Cross Country Permit event.

Nairobi’s Ngong Racecourse grounds, which until 2010 were the home of the national championships, welcomed the annual Kenya Police jamboree.

Since his impressive global title win in Punta Umbria, Spain two years ago, Geoffrey Kipsang has matured into an impressive marathon running talent and ran 2:06:12 on his debut over the distance when he finished third at the Berlin Marathon last September.

However, he returned to the surface where he first made his name and breezed to victory in 35:00, almost a minute ahead of the pre-race favourite and 2011 Boston marathon champion Geoffrey Mutai, who finished second in 35:54.

“Last year was disappointing for me (as Kipsang didn’t make the Olympics) and my aim now is to return to the World Cross as preparation for the Moscow World Championships. I feel that my form is back,” commented the winner.

In the women’s race, Kabuu edged out 2011 World marathon champion Edna Kiplagat in a sprint for the line to retain her Police title in 27:17, against 27:18 for the latter.

“My aim here today was to represent my team and prepare for a marathon in April.  My target is the World Championships in Moscow,” said Kabuu, who added that she would not be contesting a World Cross Country Championships berth.

On a hard cotton soil course at the Thika Engineering Barracks, and in blistering heat, the best Kenya Defence Forces distance runners assembled for their annual showdown.

After finishing fourth in this championship in the last two years, the Laikipia Air Base corporal out-sprinted this winter’s find Peter Mateelong 150 metres from the finish.

“My Deputy Platoon Commander told me to wait until the end and make my move. When I saw Matelong, Ebuya, Chumba and Kiptoo running against me, I was afraid at first,” said Olotiptip.

“Towards the end, I knew Matelong had a kick and I waited until the final bend,” added the winner, who completed the course in 36:07.

Mateelong, a winner at the Nyahururu (3 November) and Embu (22 December) legs of the domestic cross country series, clocked 36:09 as Linus Chumba took third in 36:16 to edge out the 2010 World Cross Country Championships winner Joseph Ebuya.

“I missed defending my title in Spain (in 2011) due to injury and bad form. After that, I was to go for further military training. I’ve had to train hard to regain my shape but I feel I’m coming back,” said Ebuya.

“I want to be like John Ngugi and Paul Tergat, who won the World Cross multiple times for the Forces and, when in good shape, I know I can do it like 2010 when I finished fourth here,” he added.

The women’s race had among others, the Beijing 2008 Olympics 1500m champion, Nancy Jebet Langat, who returned to competition after knee surgery on 24 December and last year’s Defence Forces winner Sharon Cherop among the starters; but the pair finished well down the field and it was Gladys Cherono who had the last laugh.

However, Cherono was pushed all the way to the line by the resurgent 2009 World Cross Country Championships fourth place finisher and former Forces champion, Lineth Chepkirui before breaking loose with 200 metres left to cross the line in 27:40 and win by six seconds.

“Winning two gold medals at the Africa Championships last year has given me the encouragement to go for world competitions this season,” said last year's continental 5000m and 10000m champion on the track.