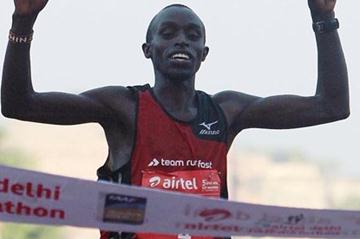 The increasing heat during the morning affected the performances in the eighth edition of the Airtel Delhi Half Marathon held in New Delhi today. Kenyan Edwin Kipyego and Ethiopian Wude Ayalew respectively were the men's and women's race winners.

Even this season’s world leader Atsedu Tsegaye did not escape from the scorching heat of the sun at the IAAF Gold Label Road Race and finished outside the top 20 in the men’s race.

Organisers had advanced this year’s race to the end of September in order to avoid the crowded October road racing programme.

Defending champion Lelisa Desisa of Ethiopia, who clocked 59:30 to win last year, was in the lead pack during the initial stages together with Kenyans Silas Kipruto and Edwin Kipyego, but the Ethiopian started trailing after the 10km mark due to Achilles pain.

Kipyego broke away from Kipruto shortly after the half-way mark. Kipyego, who clocked 1:01:11 earlier this year at Verbania, looked formidable, even though his teammate Leonard Langat, who was seventh at Delhi in 2010 and recorded a noteworthy 59:52 for his third place in Ras Al Khaimah last year, joined the leader around 14km.

However, when Kipyego passed 20km he was about 100m ahead of Langat, and it was at this point in the proceedings that the wind blowing at about 6 km/hr started to build in heat, with 24C and 70% humidity en route.

Milton Rotich, who was 10th here last year, finished fourth ahead of 'Bangalore World 10K' winner and his Kenyan countryman Titus Mbieshi. Yemane Tsegaye was the first Ethiopian finisher in sixth place, three seconds ahead of Desisa who finished seventh in 1:02:50.

"The weather was good at the start but later on it became humid. I tried my best but could not set any record. But I am very happy with the results, because I hadn’t expected to win," said Kipyego.

The women runners, whose race started five minutes after the men’s competition, suffered the worst due to the heat. Kenyan Helah Kiprop was slightly ahead of the main pack of around eight runners when they passed the first 4km. Kiprop earlier this summer had won the TCS World 10K at Bangalore.

As they passed 7km, Ethiopian Wude Ayalew was in seventh place with Kiprop still ahead in the race. The pace increased afterwards and Aberek Afework moved upfront in the next kilometre. Kiprop and Belaynesh Oljira were next with Ayalew now running in fourth place. Waganesh Amare of Ethiopia was in seventh position, but all of them were running very close to each other.

At the half-way mark Ayalew, Amare and Kiprop were running neck to neck. However the Kenyan ultimately could not cope with the pace and so it was Ayalew and Amare who were left to fight it out for top place.

At the end Ayalew sprinted to the tape and finished just two seconds ahead of Amare. Her winning time was the slowest for the race since the event’s inception in 2005.

Aselefech Mergia’s attempt to claim a third race title came to nothing as she was dropped midway due to cramps.

Ayalew, the World 10,000m bronze medallist in Berlin three years ago, said: "It was a great run for me. It was a very hot and humid day but we ran together till the finishing line. In the last few metres, I decided to push to win the race. I am very happy today, it was an unbelievable result for me."

The first Indians home were Rahul Kumar Pal, a 2012 Asian Junior gold medallist, in overall 16th place in 1:06:12. In the women’s division, the reigning Asian Games Steeplechase champion Sudha Singh emerged the fastest among the Indians in a time of 1:19:34.

Ram Murali Krishnan for the IAAF