Ethiopia’s Lelisa Desisa won the 2014 RAK Half Marathon in 59:36, with a record eight men coming home under one hour in Ras Al Khaimah, UAE, on Friday morning (14).

It was Desisa’s second-fastest time of his career and just six seconds away from the world marathon silver medallist's best time, set in the 2011 New Delhi race.

Desisa, the 2013 Boston Marathon champion who has already announced that he will defend that title in April, came home three seconds in front of Eritrea’s Nguse Amlosom, who set a personal best by more than a minute.

In a thrilling race at the sharp end, with the first eight finishers crossing the line within 20 seconds of each other, the Kenyan quartet of Wilson Kiprop, Bernard Koech, Bernard Kipyego and Micah Kogo followed the leading pair home in 59:45, 59:46, 59:47 and 59:49 respectively.

Ethiopia’s Feyisa Lelisa and Kenya’s Paul Longyangata were the other men to finish inside an hour, an unprecedented feat in a half marathon, and were seventh and eighth in 59:51 and 59:54.

Neverthless, there was a slightly anti-climactic feeling when the results were examined because faster times almost certainly could have been achieved, perhaps even Patrick Makau’s course record of 58:52 threatened, if the field had dared to race a little more audaciously over the first 5km, which was covered in 14:31.

After that initial reluctance to attack the distance, things livened up markedly in the men’s race, with Koech, Desisa and eventual third-place finisher Kiprop pushing the tempo, resulting in a 10km split of 28:30 for the leading pack of 10 men.

The leaders reached 15km in 42:38, with only Kenya’s Jacob Kendagor and Ethiopia’s Ibrahim Jeilan coming off the back of the leading group.

Koech, under the hour in his past four half marathons, continued to be the aggressor. However, sadly for him, several of the other contenders still had plenty in the tank.

Desisa and Amlosom broke away from their rivals with three kilometres to go, with initially the unheralded Eritrea looking the better of the two. A kilometre later though, and the marathon strength of Desisa enabled him to dig deeper and he opened up a critical gap of a few metres that he would eventually hold to the line.

Kenya’s Olympic silver medallist Priscah Jeptoo was a much clearer winner of the women’s race in 1:07:02, finishing more than a minute in front of her second-placed compatriot Flomena Cheyech, who was second in 1:08:13.

In similar fashion to the men’s race, there was a slow opening 5km in 17:14 but then Jeptoo started to pull away in emphatic fashion, demonstrating that she has picked up in 2014 where she left off last year, when she won the New York Marathon last November.

Her acceleration over the 5km to 10km, reaching in 32:41, meant a 15:27 split; with only Cheyech, Ethiopia’s Guteni Shone and Kenya’s Helah Kiprop able to stay within a few seconds of her notoriously flailing gait.

Her lead before she headed in to the long home straight over the final 1.1km had reached a yawning 62 seconds and the race was all but over.

Behind her, the next eight athletes also broke 70 minutes with Shone in third taking 28 seconds off her best with 1:08:31.

Jeptoo’s win was the fourth successive victory by Kenyan women in this race, a sequence started in 2011 when Mary Keitany set a still-standing world record of 1:05:50 on the same course. 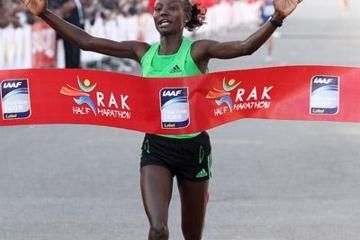 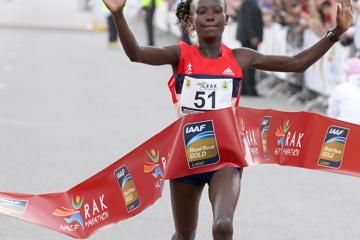 Keitany wins but records blown off course in ... 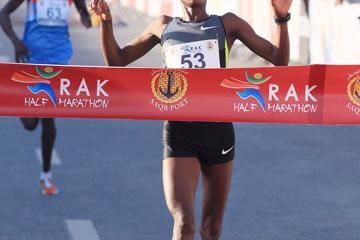