Two world leads, a world best and a meeting record in the women’s mile were the highlights of the track programme at the Müller Anniversary Games at the London Stadium this afternoon where some 35,000 fans, including IAAF President Sebastian Coe, were treated to some scintillating action just few weeks ahead of the IAAF World Championships here next month.

The ninth IAAF Diamond League meeting of the season featured 17 Olympic champions with many of the world’s best seeking much-needed points of the road to the final.

That was all about correcting the past. As for the present, let’s start with the women’s mile in which Hellen Obiri upstaged Laura Muir’s attempt to break the British record by out-battling the Scot on home straight to break her own national best and set a meeting record of 4:16.56.

Only Genzebe Dibaba has run faster than that time this millennium while Obiri moves above Mary Slaney on the world all-time list having eclipsed Faith Kipyegon as the fastest Kenyan ever.

Jenny Meadows took the field through the first two laps a full one second ahead of schedule in 2:07.27 before Muir was left alone with Obiri on her tail. They went through the bell in 3:12.28 before a battle royal ensued between the pair over the final circuit.

As the Kenyan pulled clear to triumph, Muir was left to rue the speedy early pace as she slipped out of contention to clock 4:18.03, missing Zola Budd’s British best by just six tenths.

Winny Chebet was third while there was a Polish record of 4:19.55 for Angelika Cichoka in fourth. With the top five athletes finishing within 4:20 and best marks-for-place being set from fourth to 14th, it was the deepest women’s mile race in history.

There were no records in the men’s 800m but Nijel Amos leapt to the top of the world leaderboard as he brought back memories of the 2012 Olympic final where he chased world record-setting David Rudisha to the line for a world U20 record of 1:41.73.

He wasn’t quite that quick this afternoon, but Amos adopted Rudisha-like tactics as he followed pacemaker Bram Som through half way in 49.58 and held off the field into the home straight.

Behind him, there was a flurry of fast-finishers as US champion Donavan Brazier went sub-1:44 for the first time this year with 1:43.95. That was enough to hold off Kenya’s triple world 1500m champion Asbel Kiprop.

The other world lead came in the women’s 400m where the message from Allyson Felix was: “I’m back”.

The six-time Olympic gold medallist put herself well and truly in the frame to retain her world 400m title next month as she produced a performance of familiar grace and style to set a world lead of 49.65.

Starting in lane six, she made up the stagger on Natasha Hastings within 100 metres and held her lead into the final stretch where she never faltered. Opening her long-striding legs, she came home well clear of Courtney Okoro with hurdles specialist Shamier Little completing the US sweep in a personal best of 50.40.

Race walk rarely provides the highlights at an IAAF Diamond League event but Tom Bosworth put in a strong bid for headline-snatcher of the meeting when he raced to world best in the rarely contested one mile event.

The Briton, who was sixth over 20km at the Rio Olympics, walked away from Guatemala’s 2012 Olympic silver medallist Erick Barrondo over the four laps to clock 5:31.08, beating the 27-year-old mark held by Algis Grigaliunas of Lithuania by almost six seconds.

Barrondo crossed the line second but was later disqualified, meaning Spain’s Diego Garcia was runner-up in 5:36.27, also inside the world mark.

There was no repeat of her 2016 dramatics for last year’s headline-maker Kendra Harrison in the women’s 100m hurdles but there was certainly a warning as 2012 Olympic champion Sally Pearson pushed her hard over barriers eight and nine.

The fast-starting Harrison held on to her 12-month unbeaten run as she pulled away off the final hurdle to stop the clock at 12.39, a time only she has beaten this year. Australia’s Pearson was rewarded with a season’s best of 12.48 – her fastest time since winning gold in this same stadium at the Olympic Games – to bring back memories of five years ago. She will return to this stadium a rejuvenated athlete next month after all her injury woes.

US athletes filled slots three, four and five through Sharika Nelvis, Christina Manning and Nia Ali respectively, while Jasmin Stowers and Kristi Castlin both crashed out.

Elaine Thompson maintained her unbeaten run in the women’s 100m as three women dipped under 11 seconds in a race that may well prove to be a handy preview of the World Championship final here in four weeks’ time.

Dafne Schippers had been quickest in the heats at 10.96 and the Dutchwoman was quickest away in lane five while Thompson in seven was sluggish.

But the Jamaican pulled alongside Michelle-Lee Ahye by half way and showed some of her famous finishing speed to lean in front of Schippers on the line.

It was a case of an old head beating a young tearaway in the men’s 400m hurdles as 31-year-old two-time world champion Kerron Clement overtook the fast-starting Kyron McMaster to take his first victory of the year in a season’s best of 48.02.

Only McMaster has run quicker in 2017, the 20-year-old clocking a British Virgin Islands record of 47.80 in Kingston earlier this summer. He looked determined to hack another chunk off that as he set off at a pelting pace in lane six, powering past Clement in seven within 100 metres.

But Clement knows how to time his assault – over the course of a race as well as well as a season – and as McMaster tied up badly in the home straight, the Olympic champion passed him in the last few strides to win by a tenth.

Talking of untested young talents, Fred Kerley’s first professional race produced a personal best as the new US 400m champion and so-called ‘next Michael Johnson’ was runner-up in the 200m in 20.24.

He was edged out by Ameer Webb with Isiah Young third, another US 1-2-3. Webb duly became the first 200m man to qualify for the IAAF Diamond League final.

Aries Merritt also appears to be returning to form at the right time, for the 2012 Olympic champion produced his best of the season to notch up his second IAAF Diamond League victory of the year in the stadium where he won Olympic gold.

The meeting finished with Mo Farah’s farewell 3000m and the multi-medalled Briton didn’t disappoint his fans as he rounded off his one-day meeting career with a hard fought victory over Spain’s Adel Mechaal in 7:35.15. 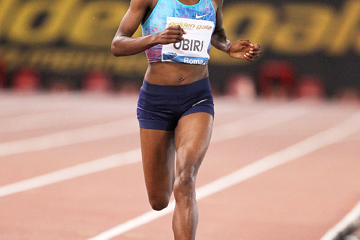