Kenyan double celebrations as Maiyo and Wanjiru win in Brighton

It was a double Kenyan celebration at the sixth Brighton Marathon, an IAAF Silver Label Road Race, as Duncan Maiyo smashed his personal best to win in 2:10:15 while Pennina Wanjiru won the women’s race in 2:34:24 on Sunday (12).

The men’s winning time represents an improvement of more than a minute for the 25-year-old Maiyo, his previous best dating from 2012 when he recorded 2:11:47 in Nairobi.

“I enjoyed the race, but the first half was a bit too fast. I got carried away,” said the men’s winner, who had never raced outside Kenya before.

“I wanted to prove my ability as a future number one and I feel that I have done that. Brighton is a good course and the crowd really lifted me.”

Second with a time of 2:11:52 was the 2013 Brighton winner Dominic Kangor, who was also the runner up last year. Completing an all-Kenyan men's podium, Mutai Kipkemei was third in 2:14:41.

For most of the race it looked as though the course record of 2:09:25 was in danger as Maiyo surprised his more experienced rivals with constant surges. The half marathon point was ticked off at a lively 1:03:47.

With Kangor on his shoulder, the eventual winner was constantly under threat which helped keep the tempo high, but once the former champion had started to slip back and a gap opened, the pace started to slow.

“At 10 miles the wind started to affect us,” explained Kangor. “And that was when Duncan started to make his first break.”

In fact, the story of the race from miles 10 to 20 was one of Maiyo attacking with Kangor and Kipkemei falling back before then closing any gap that had opened.

Ominously, it was Maiyo who was maintaining a steady pace with the other two having to vary their pace as they battled to stay with him.

After the race, Kangor was anything but downhearted despite being two minutes outside his best time. “Nevertheless I feel good and will be back here next year,” he promised.

Wanjiru arrived in the south of England seaside town as a marathon debutante at the age of 30 but left as the Brighton champion.

“It was very cold but I enjoyed it. Next time I hope to do much better,” said Wanjiru.

Kales was clearly in some discomfort and later she revealed that she had been suffering from cramp from 10km onwards. Kales, the 2013 Brighton winner, missed most of last year through injury.

The story of the women’s race was similar to the men’s with Wanjiru on course record pace until 20 miles, when the pace started to slip.

Despite her inexperience, Wanjiru was maintaining a lively pace up front as she went through the half-way mark in 1:13:35 and was still within striking distance of the record at 20 miles but that was when the pace started to falter.

BACK
Pages related to this articleAthletes
Penninah Wanjiru Ndungu 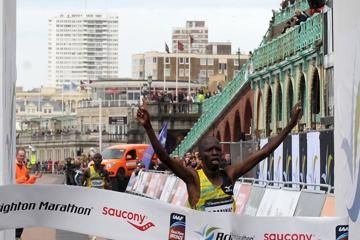 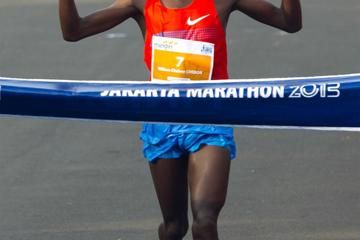