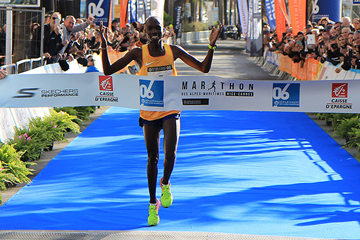 Kipchirchir and Tilahun the winners of the Marathon des Alpes Maritimes

Kipchirchir produced something of a surprise to pull off his first victory at his fifth attempt over the marathon, lowering his PB by three minutes to win in 2:10:45. “The race was good for me,” said the 26-year-old. “My strategy was to stay in the group and to push hard in the last kilometres. I’m very happy to improve my PB and I’m now going to return in Kenya for training.”

The leading pack of seven runners – Henry Sugut, Nixon Machichin, Eliud Kiplagat, Azmeraw Mengistu, Eliud Kiplagat and Kipchirchir – hit the halfway point in 1:05:02, 32 seconds in arrears of the expected time. But that was partly due to the change in the course.

After the terrorist attack in July, the start had moved from the ‘Promenades des Anglais’ to Allianz Riviera Stadium, meaning that the first part of the course was hillier than previous editions with an additional two or three steep climbs.

It also meant that the elite field couldn’t take advantage of the perfect and cool conditions of this coastal race to tackle the course record of 2:08:40, set by Kenya’s Lukas Kanda in 2011.

The last pacemaker, Paul Melly, passed the 25km mark in 1:17:08 before dropping out at 30km, which was reached in 1:33:20. At this point, there were still five runners left in contention for victory, including Kenyans Sugut, Machichin, Kipchirchir and Ethiopia’s Mengistu.

The group had whittled down to four when Sugut, who had the fastest PB of the field with 2:06:58, began to fade at 32km.

The 35km mark was reached by the four leaders in 1:49:13, having covered the previous 10km section in 32:05, showing that their pace was dropping.

But at this point Kimutai and Kipchirchir chose to ramp up the pace and their compatriot Machichin, who won last year’s Lyon Marathon in 2:10:14, was the next to struggle. Mengistu then drifted back at 38km so that only Kipchirchir and Kimutai were in the running for the title.

Kipchirchir began his decisive move with two kilometres remaining and created a small gap. He then managed to hold off Kimutai and eventually broke the tape in 2:10:44, 35 seconds ahead of Kimutai. Mengistu rounded the podium in 2:12:27 with Sugut 13 seconds in arrears.

In the women’s contest, Konjit Tilahun fulfilled her role of favourite to snatch her first success over the classic marathon distance.

She adopted an even-paced approach, passing the halfway point in 1:18:40 before continuing that tempo through the second part of the race to win in a relatively modest 2:37:56, almost 10 minutes outside her lifetime best of 2:28:11 set in Dubai two years ago.

Kedir Zahara and Lucy Murigi finished a distant second and third in 2:41:30 and 2:42:39 respectively.