Ethiopia’s Abebe Negewo broke the course record at the Minsk Half Marathon, while Kenya’s Sheila Jerotich became the first non-Belarusian winner of the women’s race at the IAAF Bronze Label event on Sunday (9).

Negewo ended Hillary Maiyo’s winning streak in the Belarusian capital, but the Kenyan put up a good fight and finished close behind Negewo as both men were given the same finishing time of 1:02:39. Negewo was first across the line, though, and became the first Ethiopian winner of the race.

Negewo, Maiyo and the four other top contenders – Kenya’s Joel Maina Mwangi, Benard Korir, Ethiopia’s Feyera Gemeda and authorised neutral athlete Rinas Akhmadeyev – soon detached themselves from the rest of the field and covered the first five kilometres in 14:43.

The pace dropped slightly, but the six men remained together through 10 kilometres, reached in 29:50, and were almost a minute ahead of their nearest chaser.

Akhmadeyev and Gemeda were unable to maintain that pace for much longer and lost contact with the leaders. Korir soon followed, leaving Negewo and Maiyo at the front with Mwangi a few paces behind as they reached 15 kilometres in 44:48.

Mwangi continued to drift away from Negewo and Maiyo as the leading duo ran side by side for the final quarter of the race. Negewo proved to have the better finish, though, as he kicked ahead of his Kenyan opponent to win in 1:02:39, taking 21 seconds off the course record Maiyo set during his first victory in 2016.

Maiyo finished a close second while third-placed Mwangi crossed the line in 1:02:53, also inside the previous course record.

The women’s race had been touted as something of a homecoming for Volha Mazuronak following her victory in the marathon at the recent European Championships, but it soon became clear the Belarusian had not yet sufficiently recovered to seriously challenge for top honours here.

Instead it was left to steeplechase specialist Sviatlana Kudzelich to lead the domestic charge in the hope of maintaining the streak of Belarusian wins in the women’s race in Minsk.

After a group of seven women covered the first five kilometres in 17:24, the pace increased and just three women – Jerotich, Kudzelich and Ethiopia’s Meseret Gebre Dekebo – remained at the front by 10 kilometres, reached in 34:31.

The trio passed through 15 kilometres together in 51:49 but Dekebo couldn’t stick with her two opponents for much longer and trailed the pair by 28 seconds at the 20-kilometre mark.

Jerotich, who earlier this year had finished fourth in the marathon at the Commonwealth Games, had the best closing speed of the pair and came through to win in 1:02:05 with Kudzelich following a few seconds later. 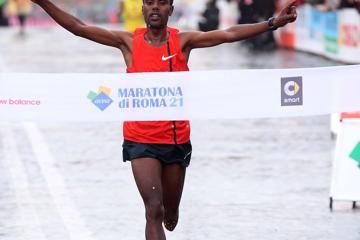 Negewo and Kitata make it an Ethiopian double...