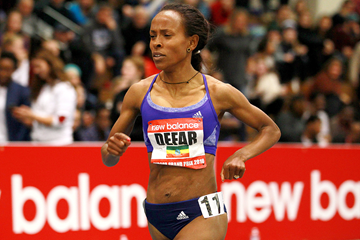 “I didn’t have the confidence to push hard in the middle of the race after so long away,” Defar explained after her run in the Reggie Lewis Track and Athletics Center in the Boston suburb of Roxbury.

“Now, after the race, I feel my confidence rising. I want to prepare for the World Indoor Championships,” where she is a four-time world indoor champion over 15 laps of the track.

In a pre-meeting press conference on Friday in a city she referred to as her “second home”, and where she has now won eight times in nine appearances starting in 2002, the much-decorated Defar had outlined ambitious goals for a comeback which hadn’t yet truly begun.

However, in the mixed zone after her victory, the reality that they might just be in reach was beginning to settle on her.

“This,” Ethiopia’s two-time Olympic 5000m champion continued, with utter seriousness, “was the biggest race of my life.”

World junior champion Dawit Seyaum went in to the women’s 1500m gunning for the meeting record of 3:59.98 but just slid off the pace in the middle of the race.

USA’s 2013 world 800m bronze medallist Brenda Martinez, who was to eventually finish second in a personal best of 4:04.58, closed on the 19-year-old Ethiopian and spooked her into a speedy finish, so Seyaum had to settle for 4:01.86, but it was still a world-leading time by more than five seconds and an indoor personal best by more than seven.

“I didn’t exactly get what I wanted, but it was a good race,” said Seyaum in a matter-of fact fashion

She cited the pace and a stumble on the last turn, which caused her to actually take a step off the track, for keeping her away from going under four minutes and possibly challenging her outdoor career best of 3:59.53.

All of the top four women were under the previous world-leading time, with USA’s Kate Grace (4:06.75) and Australia's Melissa Duncan (4:06.93) following Martinez.

Nick Willis successfully defended his mile title in 3:53.23, another world-leading time, running away from Kenya’s Bethwell Birgen on the last lap, the latter finishing second in 3:55.41.

Dejen Gebremeskel, who has also seen success in Boston before, found himself in uncertain territory after winning the men’s 3000m in 7:42.94. Gebremeskel had followed the bold front-running of Brett Robinson through 14 of the 15 laps, then put nearly two seconds between himself and the young Australian after the bell.

However, Gebremeskel had hoped to establish a mark that would make him a clear selection for Ethiopia’s IAAF World Indoor Championships Portland 2016 team, and it is far from certain that his Boston mark will be good enough.

Jackson won the race to the inside at the break and Berian consequently ran most of the race in lane two, but the fastest US runner over 800m last year didn’t seem too affected and his world-leading finishing time of 1:15.51 is the second-best US indoor time ever and fifth best in history, albeit over a rarely-run distance.

“I like to be in the lead, and I’m stubborn,” Berian said, explaining his outside position. “Indoors is just having fun for us, but Portland is home and I’d like to race there.”

Andrew Wheating was unequivocally pleased with his 1000m victory, a 2:18.68 clocking that saw him pull away from Duane Solomon in the last 50 metres.

Wheating normally finds indoor racing difficult because of his tall frame, but joked: “As long as I’m not leading or following, it’s OK.

“Today was another good day,” he said. “It’s about how good I can be on that day.”