As the lead car and press truck rounded the corner and chattered over the 13th century cobblestones lining the way toward Horni Square, the gathered fans for the IAAF Silver Label Road Race raised their voices in anticipation of a triumphant finish by one of the fastest distance runners of this generation.

What they witnessed instead was a staggering upset by a widely anonymous runner whose bib identified him only as "pace man”.

Kenyan Geoffrey Ronoh, a man with only one professional race under his belt who was enlisted by marathon world-record-holder Wilson Kipsang to set his tempo in the race, pulled away from his training partner over the final three kilometres to earn a stunning eight-second victory in a course record of 1:00:17 in the fifth Mattoni Olomouc Half Marathon on Saturday (21).

"I know this is a surprise, but it was part of my running technique," said Ronoh, whose lone race prior was a sixth-place finish in 2:15:51 at the 2013 Ahmedabad Marathon in India. "I have been training with Wilson Kipsang even before Olomouc. In coming here, he told me to pace-make as fast as I could to make 28:20 [for 10km]. I achieved it, running 28:15. After that, it was if I feel strong at the end I had to finish."

Two-time marathon world champion Edna Kiplagat of Kenya left little drama in the women's race, outclassing the field after a mere five kilometres on her way to a 30-second victory over defending champion Betelhem Moges of Ethiopia in a course record of 1:08:53. Moges set the previous mark of 1:10:38 last year.

After hitting 5km in 15:50 along with Faith Kipsum and with Moges just three seconds back, Kiplagat crushed her two closest competitors over the next five kilometres. By the time she hit 10km in 32:16, she had opened a 16-second lead on Moges and Kipsum.

Although she found the windy conditions and nearly three-kilometres of cobblestone on the course to be cumbersome, Kiplagat only grew her advantage from there.

"I didn’t have any doubts that I would win," said Kiplagat. "I was prepared to come and do my best. I knew that if I felt good I would be able to go for the record. I am happy that I was able to do it."

While this is the first time in the 20-year history of RunCzech-organised events in the country that a pacemaker has triumphed in a race, according to organising committee president Carlo Capalbo, it certainly is not an anomaly in men's running.

The most famous incident of a pacemaker beating the favourites happened on the track, when USA’s Tom Byers was employed as a pacemaker for the 1500m in Oslo but held on to his lead and ended up beating the likes of Steve Ovett, Steve Cram and John Walker.

Similar instances have also occurred frequently in the marathon. This, however, registers as more shocking.

The expected showdown between 2:03 marathoners Kipsang and fellow Kenyan Dennis Kimetto never materialised. From the opening gun, Kipsang, Ronoh and Nicholas Bor took off, leaving the rest of the men in their wake.

By the time those three hit 5km, crossing five bridges over Mill Creek and the Morava and Bystrice Rivers, the three were on world-record pace of 58:10 and had opened an 18-second advantage on Kimetto and the chasers.

"That was part of the plan," said Kipsang. "We wanted to start really fast so that we can get the pace. It's hard, but we wanted to run hard and then stabilise."

"I was not really thinking that a fast pace was going to happen from the start," said Kimetto, who finished third in 1:01:42. "That was a surprise."

Bor was dropped during the eighth kilometre as the runners passed through Smetana Gardens, leaving Ronoh and Kipsang out in front of the rest of the field. They hit 10km in 28:16, slightly ahead of schedule and well under one-hour pace, some 20 seconds clear of Kimetto.

Emboldened by the strength in his legs going up Holy Hill in the countryside and confident in his abilities as gauged in his long runs and speed work with Kipsang, Ronoh began plotting his move.

"Since I started training with him last December, I have been giving him tough challenges," said Ronoh. "On long runs, I used to be with him until the last kilometre and that is where I feared him because he had a hard kick. But more than that, I also knew that he is a just a man like me."

When the tandem reached the 18th-century military hospital at 15km in 42:43, Ronoh slowed a bit, baiting Kipsang to pass him. When he didn't, Ronoh gradually stepped up the pace.

"When I gave him a chance to go past me, he stayed a few steps behind. That is when I learned that I was capable of winning," said Ronoh. "I knew if I would come to the last kilometre with him, he would beat me. I have been training speed work with him. So I tried to push before so that I could paralyse him so that by the time he was reaching the last kilometre I would be more than a step ahead in which he could not catch me."

Ronoh eventually opened a 40-metre gap on Kipsang, and although the tempo slowed significantly over the final two kilometres, it proved to be too wide a margin to overcome.

"Even though he hasn't done any competition of late, I knew through our training that he was very strong," said Kipsang. "He really had more power to really push. In the end, I appreciate that he was there because without him, we would not have run a good time."

Ronoh, who earned €4000 in prize money and time bonuses for running faster than 1:01 and breaking the course record of 1:00:44 set in 2011 by Ethiopia's Dawit Abdulahi, believes what he showed in this race is indicative of what he is capable of in the future.

Joe Battaglia (organisers) for the IAAF 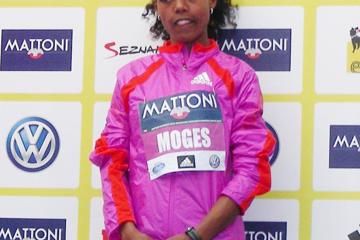