In two outstanding contests in good weather, Pars took the men’s contest ahead of the in-form Czech thrower Lukas Melich who produced a personal best of 80.28m.

Pars and Heidler were the overall Challenge winners in 2011 and 2012, indeed Heidler was also the winner in the inaugural year 2010 when Japan’s Koji Murofushi took the men’s crown.

However, this year, Melich and Wlodarczyk lead the Challenge at the halfway point in the season as far as the top hammer throwers are concerned.

The full standings of the 2013 IAAF Hammer Throw Challenge can be seen here.

Pars opened with 80.25m and Poland’s current number one Pawel Fajdek also started well with a season’s best of 79.09m and he crept closer to the lead in the next round with a throw just one centimetre shy of the 80-metre barrier.

Poland’s Former Olympic and world champion Szymon Ziolkowski also showed that, at 36, he is still a force to be reckoned with as he threw 78.79m to go into third place.

In the fourth round, Tadjikistan’s Dilshod Nazarov reached 79.42m to split the two Poles but the best was yet to come. It was in the next round that the two longest throws of the competition were unleashed.

Melich, down in seventh place after four attempts, finally got it right in the fifth round. His throw was measured at 80.28m, not only putting the Czech into the lead, but also giving him the first 80-metre mark of his career.

However, Pars was next into the circle and immediately responded with a huge winning throw of 81.02m.

The women’s competition, as expected, was a two-way battle between Heidler and Wlodarczyk.

Heidler lead the way initially, taking the lead in the first round with 74.32m although  Wlodarczyk came close with 74.28m on her second throw, and followed that up by going in front with 74.50m in the third round; but Heidler immediately countered with 76.10m, the longest throw in the world this year.

Both athletes continued performing at the highest level in the second half of the contest. Wlodarczyk improved further to a season’s best of 74.80m in the fourth round, and was even better with 74.91m on her next throw before finishing agonizing close to Heidler’s lead with 76.06m with her last effort.

“I am slightly disappointed with the competition, even though it was my best throw of the season so far,” said Wlodarczyk.

“But I am in heavy training right now. I am trying to make up for the time lost to injury this year. I think I can throw 3 or 4 metres further this year,” which suggests that she is optimistic of approaching the magical 80-metre barrier during this summer.

Another former world champion, Cuba’s Yipsi Moreno, was the best of the rest. She threw a season’s best of 72.96m in the first round and improving again to 73.28m with her penultimate throw.

Another Poland-Germany duel might have been expected in the men’s Shot Put but, sadly, it did not materialise as Germany’s 2011 World champion David Storl exited early after three staright fouls.

Meanwhile, Poland’s two-time Olympic champion Tomasz Majewski got his competition to a great start with a season’s best of 20.89m.

Majewski had just one more legal put, 20.60m with his final attempt, but his first round distance proved to be the winner.

Another of Poland’s top throwers, Piotr Malachowski, started the Discus competition in a rather disappointing fashion. After four rounds, the current world leader and Polish record holder, was down in fifth place with 61.70m.

However, Malachowski, who has recently been troubled by back problems, came through with throws of 66.66m and 65.13m in the final two rounds, which were, each easily good enough for the win.

There was a world class result in the men’s Long Jump as Mexico’s Luis Rivera won with a national record of 8.30m. Behind him, Bermuda’s Tyrone Smith took second with 8.13 and the 21-year old Pole Tomasz Jaszczuk was third with 8.05m.

Germany’s London 2012 Olympic Games Pole Vault bronze medallist Raphael Holzdeppe notched up his third consecutive win, although it was at the relatively modest height of 5.60m.

He cleared that bar on his first attempt, his opening vault of the evening, as did two young Poles, the 22-year old Robert Sobera and 20-year old Piotr Lisek. They all failed three times when the bar moved up and the latter pair were placed equal second as both of them had a failure at their opening height of 5.20m.

Poland’s 2013 European indoor champion Adam Kszczot started as the favourite in the men’s 800m but, after running the first lap under 51 seconds, he tied up in the finishing straight.

Coming through for the win, and a clear one at that, was the Kenyan junior Edwin Melly, whose winning time of 1:45.25 put him nearly a second ahead of Kszczot.

Great Britain’s Lisa Dobriskey took the 1500m in 4:04.81 after a close battle in the finishing straight with Albania’s Luiza Gega, who was rewarded with her second national record of the season in 4:05.11. 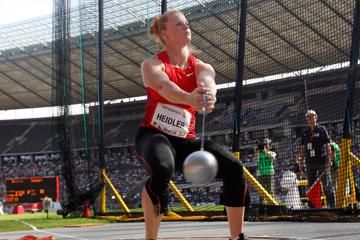 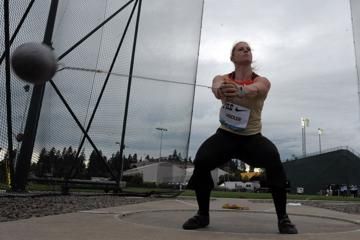