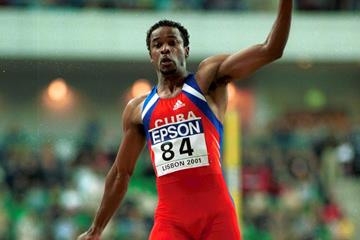 The masterful Cuban, still just 28, came to Lisbon with four such awards in his collection. That tied him with high jumper Javier Sotomayor (who just an hour earlier had failed to add to his collection), walker Mikhail Shchennikov and legendary vaulter Sergey Bubka. (Pedroso’s incredible collection of major golds also includes three from the outdoor World Championships and the Olympic gold from Sydney.

Pedroso’s day didn’t start on the highest of notes as he reached only 7.95 as the first jumper of the day, and fouled on his second. Meanwhile, the locals got plenty to cheer about as Carlos Calado took a brief lead at 8.11 before Kareem Streete-Thompson took over at 8.16.

In the second round Calado briefly jumped back into the lead with an 8.16 of his own, this one a Portuguese record. Streete-Thompson promptly landed in the same spot in the sand, another 8.16 of his own putting him in 1st on the tie-breaking rules.

But that was that, because as the third round dawned Pedroso put paid to any thoughts anyone might have had about an upset winner by digging soil at 8.43, the farthest mark in the world for 2001.

The only improvement in the final three rounds, which were marred by a total of 10 fouls, came from Aussie Peter Burge, who moved into 4th with his Australian Record 8.11 in round five.