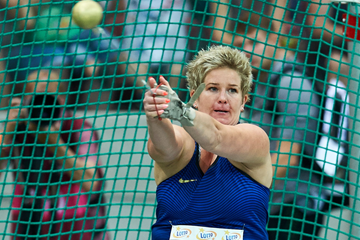 Wlodarczyk and Fajdek victorious in Samorin

Poland’s pair of world hammer champions Anita Wlodarczyk and Pawel Fajdek dominated the PTS Meeting in the Slovak town of Samorin on Saturday (17), extending their overall lead in the IAAF Hammer Throw Challenge.

On a cloudy day with strong winds, any one of Wlodarczyk’s four valid throws would have been enough to comfortably win. Her winning throw of 75.45m came in the fifth round and marked her 36th consecutive victory, a streak which began in July 2014.

"It was a very nice competition with a great atmosphere," said Wlodarczyk. "I am glad that I won, but I am not satisfied with my performance, I wanted to break the meeting record."

Fajdek was similarly dominant, throwing 78.67m in the second round to eventually win by more than two metres from world and Olympic bronze medallist Wojciech Nowicki. The Polish No.2 took second place with 76.04m while Slovakia’s Marcel Lomnicky finished third with 74.86m.

"I am not satisfied with the result because I was too slow in the circle," said Fajdek. "I am angry because I wanted to throw beyond 80 metres."

Polish athletes now fill the top two spots in both the men’s and women’s IAAF Hammer Throw Challenge standings, but there are still four more scoring opportunities left in the series, culminating with the IAAF World Championships London 2017.

On the track, the highlight of the meeting came from Ramil Guliyev as the Turkish sprinter sped to a 19.98 clocking to win the 200m from Canada’s Brendon Rodney (20.29). The race was assisted by a 7.1m/s following breeze, but a wind that strong in an event such as the 200m would have also been a hindrance at certain points of the race.

Botswana’s 2012 Olympic silver medallist Nijel Amos looked to be getting back to his best form as he sprinted away from a quality field to win the 800m by more than a second in 1:45.74. Egypt’s Mohamed Hamada Mohamed was second in 1:46.66 with world bronze medallist Amel Tuka finishing third in 1:47.06. Ethiopia’s 2013 world champion Mohammed Aman was a distant eighth in 1:47.87.