Sprint hurdler Sergey Shubenkov earned what must surely have been his most painful ever victory at the IAAF Diamond League meeting in Rabat on Sunday (16).

He crossed the line, broadly speaking, on his right shoulder after being tripped by the falling figure of his major competitor, Omar McLeod, to win the 110m hurdles at the Meeting International Mohammed VI D'Athletisme.

McLeod, the Jamaican world and Olympic champion, had got away to the better start, but after clearing the final hurdle he had the large figure of his friend and rival putting him under pressure from the lane to his right, and he lost his step metres from the line, catching the Siberian as he did so.

Shubenkov’s momentum was enough to secure him victory as he slewed over the finish in 13.12, a season’s best that equalled the meeting record. But as he rose, exchanging rueful smiles with McLeod, he was soon indicating a completely skinned shoulder which he then proceeded to show to the nearest TV camera.

He also walked away with abrasions to both knees and both hands.

It was a bittersweet moment for the Diamond League champion, but surely more sweet than bitter as he earned a measure of revenge for his narrow defeat by McLeod in Shanghai last month.

“It was a dramatic race, but a really great race,” said Shubenkov. “And I was able to win. That’s very important. I am feeling stronger than before. Having Omar in the field gave me an extra motivation.”

McLeod commented: “I am not really satisfied with finishing fifth as I was aiming to win. The race was very quick and tough. I was running very fast but unfortunately I fell at the finish line.”

Britain’s world indoor champion Andy Pozzi took advantage of the drama to claim second place in 13.30, ahead of Brazil’s Gabriel Constantino, who recorded 13.41. McLeod finally got himself over the line in fifth place in 13.48.

Ethiopia’s world 1500m record-holder Genzebe Dibaba produced a world-leading time of 3:55.47, pushed all the way round the final bend and down the finishing straight by Sifan Hassan of the Netherlands, who was rewarded with a national record of 3:55.93.

It was a classic battle in cool and somewhat blustery conditions, and both women finished with teeth conspicuously gritted.

At the bell, Dibaba led from the European 5000m champion and Ethiopia’s Gudaf Tsegay, but the latter was dropped as the two leaders hared off towards the final bend.

As they came round to the straight, Hassan came up to Dibaba’s shoulder, but could never get past it. She made another effort halfway down the straight, but the Ethiopian maintained a couple of metres’ lead to the line.

“I am very happy with my performance tonight,” said Dibaba, whose winning time was also an African all-comers’ record. “It feels great running in Africa. Based on my level and performance, I feel ready for the World Championships.”

Tsegay finished third in a personal best of 3:57.40, with home runner Rababe Arafi, winner in Shanghai, being rewarded for a strong finish with a national record of 3:58.84, prompting a joyous and well received lap of honour.

In a race of deep quality, seven women finished inside four minutes – with Jenny Simpson of the United States filling seventh place in a season’s best of 3:59.83.

The men’s 3000m steeplechase, showcasing Morocco’s world silver medallist Soufiane El Bakkali, ended in something of an anti-climax as far as home fans were concerned as their man, having led for two thirds of the race, dropped away to finish a disconsolate last.

Victory went to Ethiopia’s Getnet Wale in 8:06.01, a national record – at the senior and U20 level – and the fastest run so far this season.

He held off compatriot Chala Beyo, who clocked a personal best of 8:06.48, with Kenya’s Benjamin Kigen claiming third place in 8:07.25.

For most of the women’s 100m it looked as if the Ivory Coast’s world 100m and 200m silver medallist Marie-Josee Ta Lou was bound for victory after she had floated clear of the field following a good start.

The expected challenge from the Netherlands’s two-time world 200m champion Dafne Schippers never materialised, but instead the powerful figure of Nigeria’s fast-finishing Blessing Okagbare arrived on Ta Lou’s left shoulder, moving past her in the last couple of strides to win in a season’s best of 11.05.

It was an unexpected flourish from the 30-year-old Nigerian, who earned long jump silver at the 2008 Olympic Games and 200m bronze at the 2013 World Championships.

Schippers, who had hoped to get under 11 seconds for the first time this season having won the recent meeting at Hengelo in 11.06, had to settle for fifth place in 11.32.

After Korir’s compatriot Jonathan Kitilit had led the field into the back straight after the pacemaker had dropped away, having led the field through 400m in 49.96, marginally inside his target, Korir moved to the front on the final bend, although he almost tripped over Kitilit’s leg in so doing

But Korir soon had the most tenacious of company in the finishing straight as Amos – still only 25 for all his experience – matched him stride for stride before punching the air to mark a victory that was confirmed on a photo-finish.

Salwa Eid Naser held off the challenge of Niger’s fast-finishing Aminatou Seyni to win the women’s 400m in 50.13, a season’s best for her which closed the gap on the world-leading time of 49.05 run by Olympic champion Shaunae Miller-Uibo.

The 21-year-old Bahrain athlete, winner in Rome earlier this month, moved into a marginal lead at the halfway point and was never headed thereafter, although Seyni pushed her to the line, being rewarded with a national record of 50.24.

World champion Phyllis Francis of the United States was never quite in touch with the leaders, and finished fourth, but at least she succeeded in her stated aim of the day before in “chipping away” at her best time as she finished in a season’s best of 50.76.

Christine Botlogetswe of Botswana took third place in a personal best of 50.48.

Andre de Grasse of Canada, the Olympic 200m silver medallist and 100m bronze medallist, announced his return to the uplands after successive hamstring injuries as he beat Turkey’s world 200m champion Ramil Guliyev by 0.09, clocking a season’s best of 20.19. 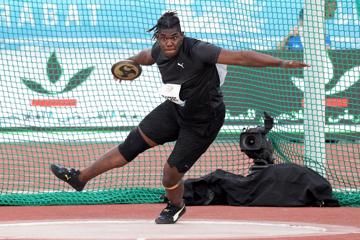 All's well that ends well for Dacres in Rabat...