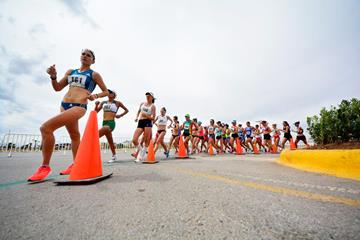 After a below-par year, 2009 world bronze medallist Sanchez’s 20km win capped a magic Saturday for the host nation, after the victories by Gonzalez in the same distance and Ojeda in the 50km.

The 2012 Olympian took the first win of the day by covering the longest distance in 3:50:28, the second-fastest time ever on the Chihuahua course.

“This is the third time I’ve won here,” said Ojeda. “This is a tough race, being the first one of the season, and my legs are still heavy from training. Every competition takes a physical toll on you and rivals are becoming increasingly stronger.”

Winner in 2011 and last year, he joined fellow Mexican Omar Zepeda as the two most successful 50km race walkers at the Chihuahua stop of the challenge, with three wins each.

Bustamante secured third place in 3:52:17, a personal best by 1:43 minutes, in a close battle with New Zealand’s Quentin Rew, who finished one second behind. Seven men broke the four-hour barrier.

In the 20km, Maria Guadalupe Gonzalez achieved what no other Mexican woman had: a win in the 12-year history of the challenge.

The national record-holder was joined by five other women with a few kilometres to go and found an extra gear to break the tape in 1:32:42, making history in the process. She covered the second half 1:20 quicker than the first.

“I knew the course from last year, when I was third,” said the 26-year old, who posted the third-fastest time ever on the Chihuahua course. “I stayed in the lead group and sped up in the last kilometres and managed to win. I believe this performance should be enough to qualify to the Pan American Games.”

Former South American record-holder Erica de Sena of Brazil (1:32:57) and Ana Cabecinha of Portugal (1:33:26) rounded out the podium. For the latter, it was her third consecutive podium finish in Chihuahua and denied her compatriot Ines Henriques a sixth podium place in the Mexican race.  Henriques settled for fourth, 11 seconds later.

Trailing by 47 second in 11th place after the halfway mark, Colombia’s defending champion Sandra Lorena Arenas dropped out shortly after.

Eder Sanchez confirmed he is capable of returning to the world elite by taking the closest of his five wins in the Mexican leg of the challenge.

Sanchez and eight other men stayed together until 15 kilometres, when he, Olympic silver medallist Erick Barrondo and another Mexican, Isaac Palma, winner in Chihuahua in 2013, moved away to battle out for the medals.

Sanchez and Barrondo found an extra gear to move away from Palma and left it until the final stretch, when the Mexican held off the Guatemalan to win by one second, 1:23:00 to 1:23:01.

Palma settled for third in 1:23:11. Australia’s three-time Olympic medallist and two-time challenge winner Jared Tallent did not have a good day and dropped out after five kilometres.

“I am back,” said Sanchez. “I can’t believe it. This is the closest race of the challenge I have competed in Mexico. It was tough due to the strong winds. I made the standard to represent Mexico at the Pan American Cup (in Chile in May). Chile will have a different weather, a desert heat, but I want to earn my spot for the Pan American Games.”

Sanchez is the youngest son of a family of race walkers, which includes 2000 Olympic 50km bronze medallist Joel and 2003 Pan American Games silver medallist Rosario. He is coached by his mother, Graciela Teran.

Host to the second stop of the challenge, Chihuahua awarded USD $50,400 in prize money to the top eight in all three elite races. The 11-leg series continues next Saturday in Nomi, Japan, with the Asian 20km Race Walking Championships.