Renaud Lavillenie came within one vault of failing to record a mark in qualifying yesterday, but the Frenchman was at his best for the pole vault final at the European Indoor Championships in Prague on Saturday (7).

Lavillenie said that yesterday’s scare gave him some pressure coming into the final, but he approached it a palpably confident athlete.

The three-time reigning champion elected to enter five centimetres higher than yesterday at 5.75m, and the writing was quickly on the wall for the finalists. He sailed clear on his first attempt, before passing at the next two heights of 5.80m and 5.85m.

Russia’s Aleksandr Gripich and Poland’s Piotr Lisek placed a bit of pressure on the Frenchman with clearances at 5.85m, but the world record-holder sealed his fourth title in succession with just his second vault of the afternoon at 5.90m.

The final was a demonstration in conservation from Lavillenie, who added two centimetres to his four-year-old championship record with a second-time clearance at 6.04m.

As a mark of his dominance, Lavillenie has won 31 of his 32 competitions since the start of 2014, and he holds the seven best vaults of the 2015 season. Historically, he also owns the three best marks in European Indoor Championships history.

A packed-out O2 Arena was abuzz for the 400m final where reigning champion Pavel Maslak, whose face adorns the promotional material across the city, lined up to defend his title.

Running from lane five and attired with his trademark armbands, Maslak passed Dylan Borlee on his outside within the first 100m and crossed to the inside with the clock showing a scintillating 20.99.

As fast as Maslak’s first lap was, he didn’t for a moment look like faltering, and the crowd wouldn’t allow him to.

The decibel levels as Maslak turned into the home straight were unmatched over the first three days of competition, as the 24-year-old powered to a championships record of 45.33 on a track far from tailor-made for the quarter-milers, taking 0.06 off the mark set in 2002 by Marek Plawgo.

“I was in much better shape compared to the Gothenburg championships so I was not that nervous. But mentally it was much more difficult than in 2013,” said Maslak, who missed the 2014 European Championships in Zurich with injury.

Borlee, who will join his esteemed older brothers Kevin and Jonathan for 4x400m relay action tomorrow, picked up the silver medal with a 46.25 PB just ahead of Rafal Omelko in 46.26.

It was at these championships where Ivana Spanovic made her senior debut at the age of 16. Eight years later, the Serb claimed her first senior title with an outright Serbian record of 6.98m.

The world indoor bronze medallist put together a polished series, notching up four jumps beyond the 6.80m mark. Her fourth-round mark of 6.89m also went unsurpassed.

“I keep focusing on seven metres from now on and I hope I will be able to defend this title in two years when the championships will be held in my country,” said Spanovic, alluding the 2017 edition in Belgrade.

Germany’s Sosthene Moguenara held on to silver with a first-round season’s best of 6.83m with world youth long and triple jump champion Florentina Marincu from Romania, 18, setting an outright PB of 6.79m for bronze.

The women’s high jump final was decided in a jump-off with Mariya Kuchina clinching Russia’s first medal of any colour at the championships with a sudden-death 1.97m clearance.

Kuchina found herself in a not-too-dissimilar situation at the IAAF World Indoor Championships last year where she opted to share top spot with Kamila Licwinko after sharing identical series. This time, she jumped on.

“I decided that I didn't want to repeat last year's situation from Sopot when there were two champions,” said Kuchina. “I understood that it was some kind of risk but I did it and finally it was the right decision.”

Italy’s Alessia Trost missed out on the title on the countback format with world leader Licwinko – the only jumper to clear two metres this winter – third with 1.94m.

The women’s shot put was also won in the closing moments. Anita Marton from Hungary improved her outright national record from 19.04m to 19.23m in the last round to deny Yulia Leantsiuk from Belarus, who led with 18.60m.

Among other injuries, Portugal’s Nelson Evora has suffered two shinbone fractures since winning the Olympic triple jump title in Beijing but the veteran claimed his first title since those championships seven years ago.

Wearing a protective strapping on the shin, Evora recorded a season’s best of 17.21m – his best indoor jump since 2008 – to beat Spain’s Pablo Torrijos who set a national record of 17.04m despite being 21 centimetres shy of the plasticine. Romania’s Marian Oprea was third with 16.91m.

Employing his favoured front-running tactics, Turkey’s Ali Kaya erased Mo Farah’s championship record of 7:40.17 from the books with a gun-to-tape 7:38.42 win in the 3000m.

A second gold medal for Russia followed not long after Kuchina’s high jump win, as Elena Korobkina used her 1500m pace to claim the 3000m title in 8:47.62 from early pace-setter Svetlana Kudzelich from Belarus, second in a 8:48.02 PB.

With just two athletes qualifying by right from each 1500m heat, title favourites Homiyu Tesfaye and Ilham Tanui Ozbilen didn’t leave anything to chance, but their front-running tactics were perhaps unnecessarily extravagant.

Ozbilen began to tie up on the last lap and was caught by Britain’s Chris O’Hare in 3:41.83 to the Turk’s 3:42.23, who said he will adopt different tactics for tomorrow’s final.

In the 800m heats, world leader Jenny Meadows finished fourth in the first semi-final but was promoted into a qualifying spot after Russia’s Anastasiya Bazdyreva was disqualified for a lane infringement. Reigning champion Nataliia Lupu and Olympic bronze medallist Ekaterina Poistogova also qualified.

The 60m heats were headed by a 7.07 PB from European 100m and 200m champion Dafne Schippers. British teenager Dina Asher-Smith was close behind in a European age-19 best of 7.10, with Verena Sailer from Germany credited with an identical time.

Hanna Knyazyeva led triple jump qualifying with an Israeli indoor record of 14.40m, the third-best mark in 2015. She will be joined in the final by world leader Yekaterina Koneva, who secured automatic qualification with her opening jump of 14.20m.

After four events, Ilya Shkurenyov from Russia leads the heptathlon overnight with 3512 points by 101 points from Germany’s Arthur Abele, who has a stronger second day than his Russian rival. 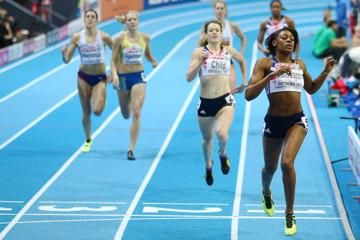 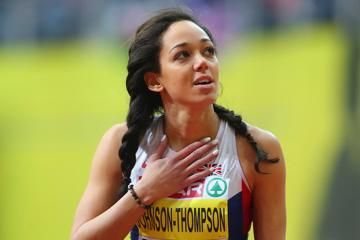