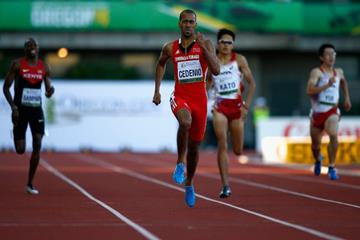 Machel Cedenio of Trinidad and Tobago won the 400m with a time of 45.13, the fastest junior time in the world this year and a national junior record.

Running in lane four, Cedenio took control of the race on the backstretch as he moved by Kenya’s Alexander Lerionka Sampao to his outside.

When the stagger was finally unwound at the top of the homestretch, Cedenio was well away from the field and crossed the line more than a second in front of his nearest challenger.

Japan’s Nobuya Kato took silver with a strong run in the home straight, finishing in 46.17 to deliver Japan’s best ever finish in this event.

Bronze went to Abbas Abubakar Abbas of Bahrain, who was slow out of the blocks but pushed hard on the back stretch to reach 300 metres as Cedenio’s closest pursuer. His finish time was 46.20 as Sampao held on for fourth in 46.55.

Cedenio follows in the spike marks of his compatriot Rennie Quow, the 2006 world junior champion. His winning margin of 1.04 is the second biggest in the 400m in IAAF World Junior Championships history.